I hope everyone is well and you’re excited about the weekend.  I know I am.  Now that soccer is over, I’m looking forward to leading a Saturday morning Trackstars group (we now have an indoor space and it’s wonderful!!) and then heading to the Sunset for eggs and bacon.  I’ve also got a few other chores/errands to do but nothing too big.  This should be a relaxing weekend for us!

Today I wanted to talk about breastfeeding and introducing solids!!! 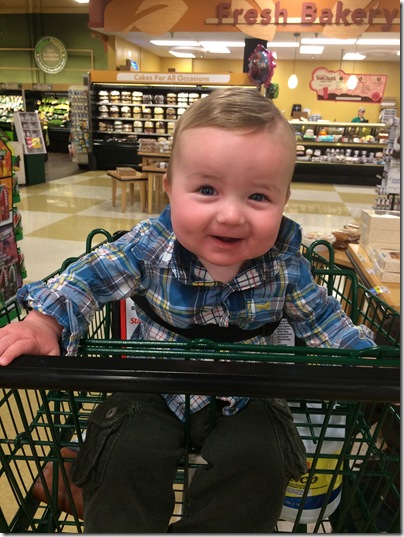 I mentioned in Porter’s 6-month update that I usually don’t introduce solids until my babies are 8 or 9 months old.  Since I’ve had numerous emails asking me about this decision, I thought I’d touch more on it here on the blog.  Apparently how, what and when you feed your children is fascinating to others.

Basically, we don’t introduce solid food until the child is ready for them.  Some people call this “Baby Led Weaning.”  I’d take it even further and call it “Baby-Led-Weaning-With-A-Hefty-Side-of-Lazy-Mom.”

What does that mean??

I don’t do baby food.

Purees.  Foods on spoons.  Me sitting down with a spoon and feeding a baby.  Yeah.  I don’t do that.

I have two main reasons behind this:

I’ll break it down for you.

Not in all things but in many.  I don’t take the time to pick out the perfect outfit for my kids.  I make many lazy meals.  I pick and choose the things I want to battle and fight against and spoon feeding a baby just isn’t something I want to sit down and do.  Even if I had the extra 10 minutes that it would take to feed a baby (and pick up that messy half-spiddle/half-food stuff off their chins and spoon it back into their mouths….eek), I just wouldn’t.  Does that make me an anomaly?  Maybe.  I know that for some mamas there is this draw to spoon-feeding.  It’s considered fun.  I so badly want to identify with that because I DO SEE THE CUTENESS…but again it’s just not a desire.  We can still be friends – please, let’s still be friends.

Another reason I delay solids is that I LOVE nursing.

I fell in love with nursing my babes six years ago. When I first set out to breastfeed, I hadn’t a clue what it would be like, if it would work, if I could do it.  And I struggled.  Big time.  (I also had some postpartum depression that I’m sure didn’t help).  I felt so stuck to Henry, like all I wanted to do was run away but he would always be there, gnawing on my nipple.  Sorry.  That’s the way I felt.

His cuteness kept him alive…

And then God changed me.  Because I needed to be changed.  I needed to let go of some of my freedoms and my selfish ways and truly embrace motherhood and, for me, that meant embracing breastfeeding my baby.  I don’t think He requires that everyone nurse their little ones – I think that, for me, nursing was a way of giving up my control.  Six years later and I’m a huge advocate.  It’s mess-free.  It’s convenient.  And breastmilk has everything that Porter needs at the moment.  We’re in no rush but in a few months from now I’d say cheerios or small pieces of banana will be his first foods.

So anyway…that’s the reason(s) behind the madness.

And now you know.