I wrote this post for Janetha exactly THREE years ago to the day!  I found it as I was going through my drafts the other day (I have 167 drafts!?!)  and I just had to re-share it (plus it’s Friday and I’m done with this week and sitting down to write makes my brain hurt).  A little flashback Friday action if you will….(yes, it’s a satire piece.  Yes, Henry and Clara were so tiny and YES I did end up running a triathlon!  Took 2nd place!)

Hello Meals and Moves lovers! I’m Lindsay and I blog at Lindsay’s List. While Janetha’s away, the mice will play. Or rather, you guys are going to have to read some stuff I’ve come up with below. Or something like that. Not sure why we’re mice.

As I was running intervals yesterday, pushing my two rather rotund toddlers in their behemoth of a jogging stroller, I got to thinking about how inefficient this exercise was.

If you’ve ever run behind a stroller before, you know what I’m talking about. Not only are you using all of your momentum to push against the 60+ pounds of baby meat/stroller frame, it’s also rather odd to run without using your arms. You kind of just move your shoulders, arms glued to the handle bar, and hope that your knees don’t jam into the back of the stroller. Very inefficient.

If you’ve ever trained for any type of competition before, you’ll know that you WANT to become as efficient as you can be. Streamlining your body’s movements can shave seconds and even minutes off of your time. NASA spent months developing the “world’s fastest swimsuit” for Michael Phelps, analyzing various weaves and fabrics to reduce his drag in the water. All in the name of becoming more efficient!

Well, most of us aren’t Olympic athletes in hopes of winning gold. We exercise for our health and to burn calories. So for us, being efficient isn’t as much of a priority. In fact, our bodies burn the most calories when we perform the most inefficient moves.

Think about it: we hold 25 pound dumbbells while doing squats, tricking our bodies into lifting more weight. If we were trying to squat in the most streamlined way, wouldn’t we just drop the weights?? It would be much easier (faster) for our bodies to complete that move.

Walking at an incline. Upping your bike’s resistance in spin class. Walking lunges with a body bar on your shoulders. All ways in which we make it HARDER on our bodies, which means less efficiency. Because in order to CHANGE your body, you need to TRICK it.

And trick it, we will.

**I am in NO way being serious by suggesting these activities. If you get hurt doing what I describe below, well, then you’re an idiot.**

RUNNING: Run awkwardly, flailing your arms and kicking your legs.

As you’re running, create inefficient movement by pretending that you’re a Wacky Inflatable Arm Flailing Tube Man. You’ll need to trick your legs into thinking you’re not really running, but more like dancing a jig, while propelling yourself forward.

Don’t worry. It’s actually much harder than it sounds. And that’s sorta the point.

And ankles for double the calorie burn. With the arrival of Fall, comes the onslaught and near suffocation of all things PUMPKIN! It’s everywhere – in our lattes, smoothies, cookies, bars, oatmeal. Gag me with a stick if I see one more rendition of “Pumpkin Oats”. I mean, I like pumpkin and all, but let’s pick another fall food. Like Thanksgiving Turkey.

“Make mine an Iced Grande with two shots of Turkey”….Not doing it for you? Fine.

We’ll just use the pumpkin for our workouts, where it belongs!

And you thought I couldn’t come up with a good workout. HA! The drag of the pumpkin cans will create a wonderful resistance in the water. HUGE calorie burner. Plus, afterwards, you can go home and blog about how you’ve used pumpkin in this awesome, never before seen on a blog, kind of way. Except that now your blogger friends have read this post too…so it’ll just seem like the same bowl of pumpkin oats lame.

BIKING: Bike with flat tires, wearing all the clothes you own.

Take a knife and slash your bike tires. The airless tires will make it SUPER hard to pedal, which is what we’re going for! 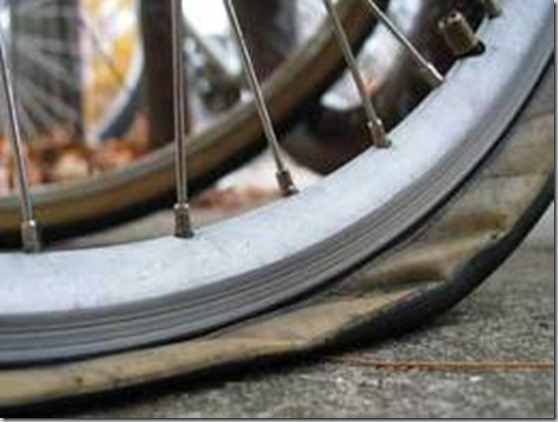 Before you head out the door for your “flat tire” workout, grab your hoodie, long sleeve tee, mittens, hat, scarf, jacket and adult footie pajamas and wear them. All. Layer upon layer of clothing will make you sweat (hello! You’ll totally lose water weight!) AND the weight of all that flannel will increase the impedance on your body.

Bonus points if you can find some really thick baseball cards and stick them in your spokes.

I’m racing in my first triathlon on Sunday. Thinking of how awesome I’d look if I implemented these ideas. People might laugh…but I’d be laughing in the end, because I’ll have gotten an awesome workout, and they’ll still just be…efficient.

Questions: Branch out – what are some other ways we can be inefficient?? Any tips for my triathlon?? Do you own footie pajamas?? (yes, yes I do!)