…also known as, “one of my MANY life learning experiences.”

As I was looking through Facebook yesterday morning, I happened upon Ashley’s status:

First off, I love this girl.  We relate to one another on many levels.

Second, I too cut my men’s hair to save money.  I’m no hairstylist.  That’s a fact.  But over the years I’ve refined my craft: trying to keep the hair IN the bathtub and not out, giving my “signature cut” to the sides and humming one or two 80’s hairband songs.  Now that Travis’ hair is long, this chore doesn’t happen as often as it used to.  Something we’re all probably better off for.

Which brings me to my third point.  Just like Ashley, I too have screwed up my kid’s hair with clippers.

Flashback with me if you will.

So once upon a time I was a young mother.  This was like 5 years ago.  A long, long time.

Henry’s hair was stuck between a mullet and a hard place.  It was super fine (as baby hair tends to be) and it bugged the crap out of me.  Half had fallen out, half had stayed put and what resulted was one odd looking hairdo.

So I tried to fix it.

With clippers and raw skillz.  <-the z is necessary.

Using an electric toothbrush to distract my easily distractible 8-month old, I got to work.  Travis wanted no part.  “You don’t cut a baby’s hair.”  And especially not at home.  That’s what those overly-priced kid-themed barber shops are for.  I told him I was saving us money.  That always shuts him up.

S-it! went my mouth when the clipper guard fell off and I mowed a 2-inch hole up the side of Henry’s head. 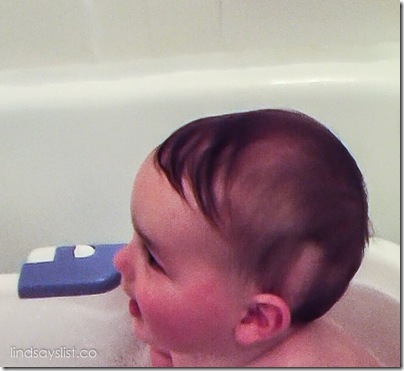 Then I laughed.  Obviously.

And so did Travis.

Then I cried.  Obviously.

But Travis didn’t because he’s a man.

Damaged.  The kid was damaged goods.

Luckily he can’t remember a thing (babies are kinda dumb ya know).  Why just yesterday, he let me give him a mohawk. 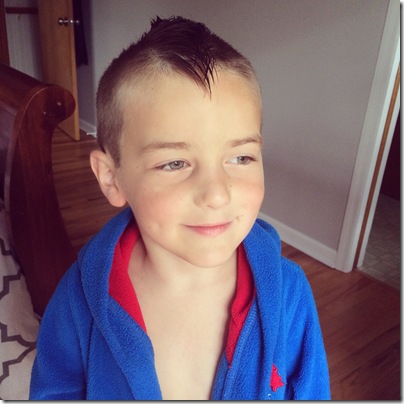 Anyway, all this to say – Ashley, you’re not alone and you’re not a bad mom.  You’re just a mom.

And the exact best one for Hunter at that.

That’s how it works.

We get better as mamas, hair grows back and little babies grow into handsome, almost 6 year olds.

Don’t blink or you’ll miss it.

QUESTION:  Are you safe with a set of clippers??