The following post is sponsored by Fitfluential LLC and Verizon Wireless. As always, all opinions expressed are my own!

Verizon Wireless does it again!!  I’ve been SO blessed to work with this company (go here and here to read about my undying love)!  I was recently sent the new Nokia Lumia Icon to review.  Prior to this, I was using my iPhone 5s (so you’ll see some comparisons below), but so far, I LOVE this phone!

Let’s discuss some of my favorite features:

A Half Press Shutter Button

It’s basically just a given this phone has a high quality camera.  That’s kind of the reason it exists.

But what really makes it special is the shutter button.  With other phones, you see what you want to take a picture of, hold your camera up, press the shutter button, and the camera begins to refocus.  Then once it’s grabbed focus, it evaluates the lighting for the exposure settings, does some other random things, and at this point whatever/whoever you were taking a picture of is completely changed or their smile muscles are cramping or they are completely out of breath and can’t suck in their stomach anymore.

On this Nokia, there is a dedicated shutter button on the side that can be half pressed just like on a camera.  When you half press it, the phone does all of this focus, exposure work.  Then at the instant you want the picture to be taken you press it all the way, and that’s the instant that you capture. 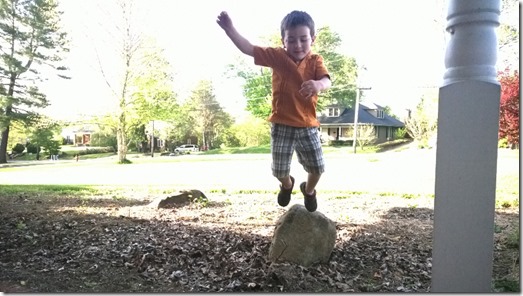 This is especially important if you have impatient children you like to take pictures of.

There are tons of camera features I haven’t had much time to play with and are likely most gimmicks but with the clear image quality and instant capture, they aren’t even the icing on the cake, more like just the food coloring in the icing.

The operating system (OS) is easy to learn if you have any windows experience.  And if you don’t, you should get some as nearly 90% of the world uses Windows.  One nice thing is the OS comes with mobile versions of Microsoft Office by default.  As an aside I heard of a school district in TN going to all Macintosh computers, and couldn’t help but think what a disservice to the students was being done in a misguided attempt to be trendy.  Most of these kids will need to get jobs someday and most employers will expect them to be experienced with Windows machines.

Some nice features are the Live Tiles where you can see info running on the apps.  Not just a number letting you know something has happened but the actual text that tells you who commented on what, what the subject of the email is, etc.  Also I’m quickly becoming a fan of the apps being in a big alphabetical list that can be accessed by letter.  For apps you don’t use all the time, it’s easier than trying to remember what page, or what group folder you put it in.  If you can remember the name, you can be at it in two taps. 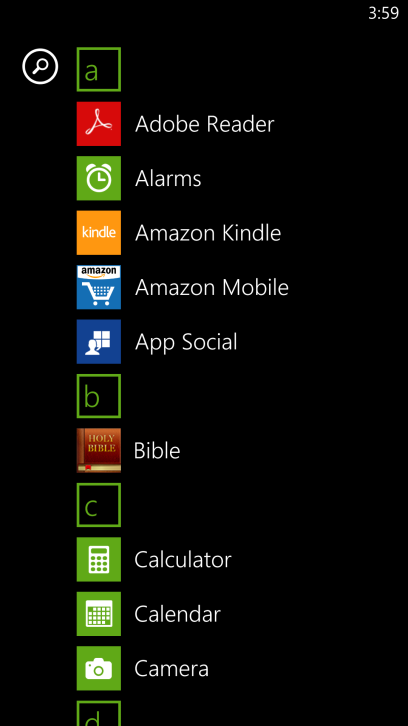 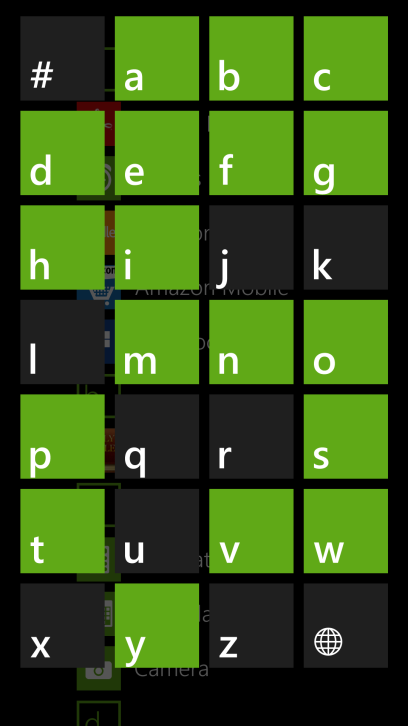 The screen is almost too big.  It’s just where it’s an effort to type with the holding hand.  Not impossible but an effort.  For sure it’s easier to hold with one hand and type with the other (but the picture quality you get is well worth it!!).  It’s 5 inches and can display full HD 1920 x 1080, (iphone 5s by comparison is 4 inches with 1136 x 640 resolution).  For actually watching things on your phone, which I’d rather not do but some days it’s best, it makes a huge difference in enjoyment.

So that’s the what the phone has going for it.  A LOT!

The one thing I’d change about it (or maybe just haven’t figured out how to do yet) is allow more detail on the Lock screen.  I understand that for privacy reasons some people wouldn’t want this.  They want, “You have a new text message from Travis” to show up instead of the contents of that text message.  But really no one else is looking at my phone.  I’d like an exerpt from every email.  I’ll treat an email differently if it’s a question from a Janetha or a Blend company instead of another deal notification from Amazon.

All in all, I love this phone!  Especially for taking pictures of these precious little people I’ve got running around – it’s WAY easier than pulling out my DSLR.  Huge thanks to Verizon and Fitfluential – you can go here to learn more about the phone and snag one of your own!

QUESTION:  What phone are you currently using?  Do you like the camera/OS?