I wasn’t going to post anything today.  That is until Travis went off this morning about his shirts.

You see, I bought him a pack of Hane’s white undershirts.  Size Large…because that’s the size he normally wears.  This morning, he opened the package and put one of the new shirts on.  TOO BIG.  He was furious.  <-I won’t go into the differences between men and women here, but suffice to say that I’m pretty sure most women would be jumping up and down at the thought of an article being TOO BIG.  “I’ve lost weight!”  “Maybe my body has finally figured out that brownies are the way to weight loss!?!”

Anyway, the next words out of his mouth were, “Stop fooling yourself, America!  When I was 16 years old, I wore a Hane’s Large and it fit.  If anything, I’m BIGGER now.”

What he experienced is called, “Vanity Sizing.”  A sneaky (or not so sneaky) way that the fashion industry has switched around some numbers to make us feel better about our bodies. 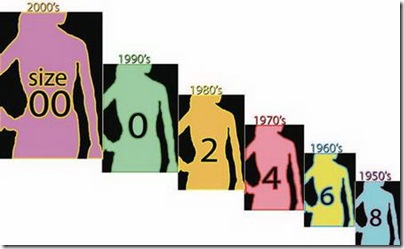 I’ve read the trends.  I’ve been in the fitness world for 8 years now and worked with numerous weight loss clients.  The truth:  We are not, in fact, shrinking, but expanding year by year.  I just find this all fascinating.  I wanted to hear WHAT YOU GUYS THOUGHT?

Does it even really matter?

Is it a disservice to anyone?