**I wrote this post a day before I got sick, so exactly 24 days ago.  At the moment, I still haven’t found the right words to describe how I’m coping with life right now.  They seem too depressing.  And I’d rather put some positive out there for you guys.

Right now, I’m not this mom described below.  But soon, very soon, I will be.  So I’m holding out hope that I’ll be cool again.  Enjoy!**

Every afternoon around 3pm, my day gets a little better.

It’s at this time that Henry decides that he’s done laying in his bed to rest and that he peeks his head out of his room.  Now before any of you accuse me of being the bad mother who still makes her 4 year old take “rest time” in his room, let me tell you that the hour that he’s in there is needed by both parties.  He rests and mama collects herself so we can make it as a family until bedtime.  Needed.  Trust me.

Every afternoon, Henry finds me wherever I am in the house and runs to tell me that he’s missed me, like he’s been to Antarctica and back in that last hour.  Then he asks for food. 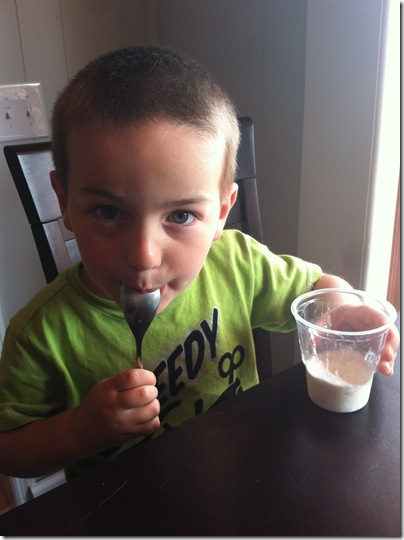 THIS is why you should call me a bad mother.  McDonald’s soft serve as a snack.  Actually this makes me the best mom ever!

After a quick snack, we work on his school books together.  Yesterday, he read, “See Me Dig,” and when I say read, I mean that he actually read most of the book!  Boy genius, I tell you.  Today it was his math logic book.  I sit beside him at the table and sip a mug of black coffee, constantly directing him back to his work because without fail the conversation will turn from math to legos in about 2 seconds.  I try not to lean over and kiss his forehead too much, but it’s just too delicious not to.  Inevitably, he’ll end up with marker on his face and I’ll consume a second cup of coffee without realizing it.

Every afternoon at 3pm.  It’s a good time.

QUESTION:  What are YOU doing every day at 3pm??