This is going to be one of those posts where I yell at you to get off the couch.  If you don’t like to be yelled at, turn the volume down on your computer.

(since there’s absolutely NO audio, that was a joke.  I think I’m hilarious.)

Stop whining about how you can’t do something and simply do it.  Or at least TRY!  Trying’s the best part!  In trying, you learn much more about yourself and your limits.  Take whatever preconceived notion you have about what you CAN or CANNOT do and break it.

All of those are action words, because changing requires action.  It requires putting one foot in front of the other.  (don’t trip.)

Two things that were most commented about in yesterday’s post:

Today, I’ll touch on the half-marathon subject and leave the blogging one for another day.  Sound good?

I’m a runner.  I grew up running cross country and track.  I’ve ALWAYS enjoyed it – running is my “go-to” exercise.  When I have an hour to spend working out, I like to lace up my Pearl Izumi’s (or Five Fingers) and GET OUT AND MOVE!  The first two miles are ROUGH, but once I break that barrier, it seems like running is absolutely the only thing I’d want to be doing at that moment.

The fact that I’m pretty good at it, is just icing on the cake.  I often wonder – “Would I enjoy running if I weren’t fast?  Or if I could only run short distances?”

The fact that I’ve found a passion and that I make time for it.  That’s what’s important. 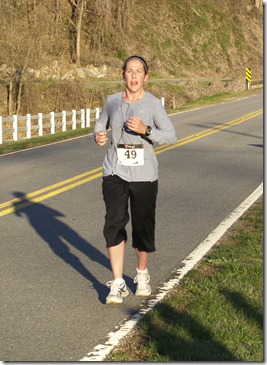 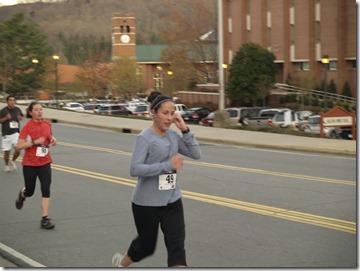 My first half-marathon was the WNC Valley of the Lilies, April 3rd, 2011.

I’m pretty happy with that time (and with the fact that I won 1st in my 20-29 age group!).  I realize that there are many people reading this, thinking that 1:42 is a fast time.  I also know that there are THOUSANDS of people who think it’s pretty slow.  It’s all subjective.

I said I was a runner.  What I failed to mention was that prior to training for and running that 1/2, the most I’d run was like 8 miles. I don’t like distances over 6 miles really.

Long, long runs are boring.  And they hurt my body.  My legs ache and muscles tense up.  Don’t even get me started on the hours spent on the toilet after my first 12 mile training run (too much?).

So I did.  I put in the hard hours – the time away from my little family.  I ran in the rain and on the treadmill and in the cold.

I “bit the bullet” and just DID IT!

After that race (and just like with natural childbirth), I fell in love with that high.  That sense of accomplishment.

So I’m doing it again.

Hopefully, faster. But maybe not.  At least I’ll give it my best TRY.

I encourage you to BITE THE BULLET and work towards that goal!  Changing your diet, working out more, spending more time with God.  Whatever it is, just take that first training step!

It’s well worth it.  And you might just come home with a cool clay medal. 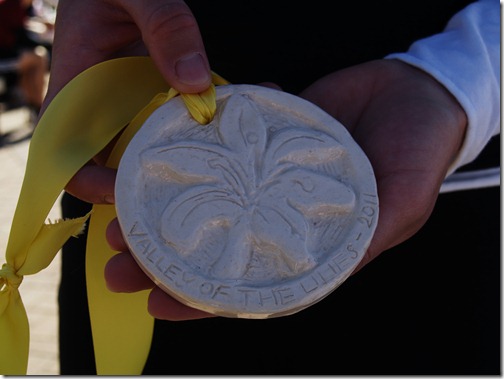 QUESTIONS:  Are you “a runner”?  When’s the last time you “bit the bullet”?