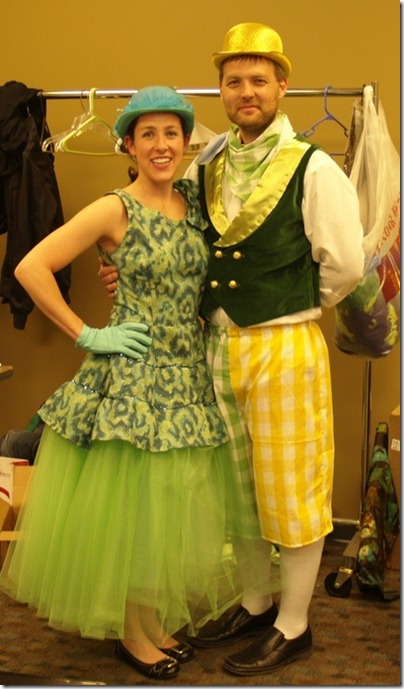 It’s Sunday night.  The curtain has been called.  My green Oz dress has been hung up, only to be brought out of retirement for the next time the theater does a show that requires poofy, green tulle.  FOUR Pond’s towelettes later and my eyes are STILL covered in a weekend’s worth of stage makeup!

Now that the show is over and I can sit with my thoughts (and on my BUTT for that matter), I thought I’d share some observations I’ve made over the past few months of doing Oz. 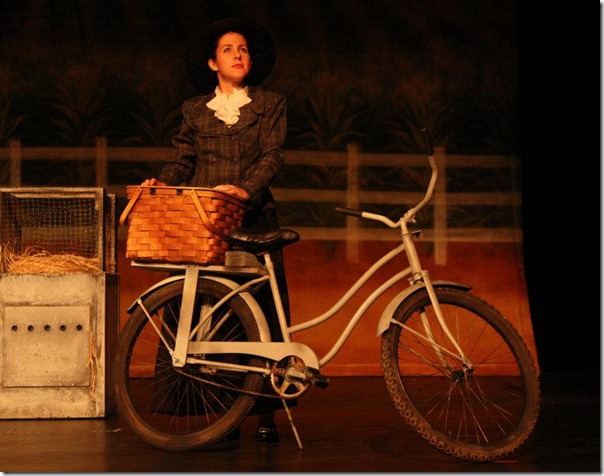 Playing a meanie is downright FUN!

I’ll admit – when I was cast as Ms. Gulch, I was really only excited about the FLYING part!  But then, as we started rehearsing, I realized something – acting like a b*tch is A LOT of fun.  Jillian Michaels is on to something here.

By channeling Almira, I was able to release a lot of pent up anger.  If I had a bad day parenting or “wifing”, I could scream and cackle it out of me up on stage.  After performing, I always felt 100% better!

Travis liked to joke and say to the people who congratulated me, “Well, you know, she hasn’t broken character for 3 weeks now”.  Then, I liked to ride over him with my Gulch bike. 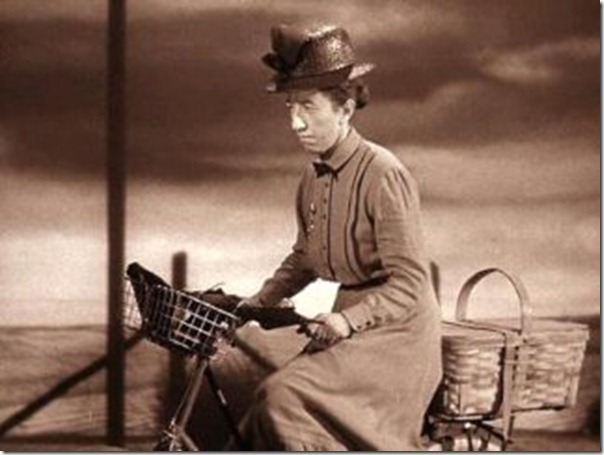 Hours upon hours of rehearsal can’t protect you from accidents happening.  A couple of snafus happened over the course of the four shows:

– The Wizard’s mic started falling off during the last scene where he’s doing the “Here’s your heart, brain, courage” part.  He somehow caught it slipping down and had to hold one hand awkwardly atop his head while trying to act nonchalant.  YOU try awarding the Tinman a heart that goes around his neck with only one hand!

– Dorothy’s dress RIPPED down the back during a wardrobe change and she had to go on with tons of safety pins holding it together.  Emo teens everywhere would save up a month’s worth wages at Sbarro for the chance to buy that safety pin dress!

– The worst snafu?  Before I take flight as Ms. Gulch in the tornado, I’m seen pedaling my bicycle.  The bike is on a platform and it’s anchored in such a way that kept it stationery while I pedaled.  Rehearsal after rehearsal, my flying went flawlessly – I was supposed to be lifted off the bike, taken straight up in the air and then across the length of the stage.  Just like this:

Saturday night, my darn skirt got caught in the bike spokes and when I was lifted, the bike came with me!  Not cool.  It was terrifying.  I’m SO thankful that I’m fit and strong, because I was able to hold the bike while flying across the stage (and I remembered to cackle!)  The audience had no clue – but I knew and I was shaken up for the rest of the show.

Oh, well…shit happens.  You just have to pick yourself back up and move on.  Or ride off stage, awkwardly attached to a bike, in my case.

You can turn ANYTHING into a sex joke.

If I never have to hear, “Want to see my “Winkie”?” or “You can follow MY yellow brick road!” one more time, I’ll consider it a blessing.

It’s why we enjoy fairy tales.  Good trumps evil.  The Wicked Witch melts.  The ring of power is destroyed.  Gaston falls from the tower.  Osama Bin Laden gets shot by snipers.  Etcetera, etcetera.

Is this sentiment highly romanticized?  Yes, definitely.  BUT, if my faith has taught me anything, it’s that God will always overcome any evil plans that the Devil might have for me.  He wants to give us the desires of our hearts.  We are chosen.  He fights for us.  He is our bridegroom and we are his bride.  Very romantic and very comforting! 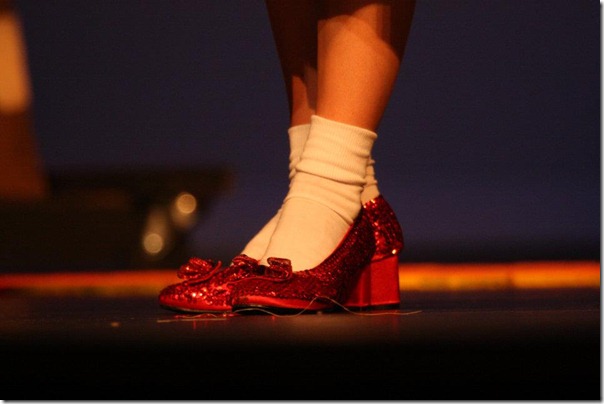 Now that the show is over, the Wright family can return to some sense of normalcy.  The kids can go to bed at a decent hour every night.  I have high hopes of cooking meals that aren’t laced with preservatives.  And Travis will return to courting his long lost love, Final Fantasy 8.

That is….until I audition for the NEXT SHOW, Aladdin come Wednesday night!

QUESTION:  Have you done any theater/drama performances before??  For me, the first theater production was last year’s Beauty and the Beast – I was 8 months pregnant and it was pretty miserable!

P.S.  If you haven’t filmed your “Meet Your Trainer” for Tuesday Trainer yet, there is STILL time!!  Do it!  Do it!!  Remember, anyone can participate!  It’s not an elitist club…yet.