Most weekends are great.  Travis has two days off, so I have an extra pair of hands to help with the kids.  There’s also Sunday, which is my favorite day of the week.  My house gets a thorough cleaning, the fridge becomes restocked and there’s almost always a meal eaten out at a restaurant (which means I don’t have to burn something and Travis doesn’t have to pretend to like burnt food).

This weekend, however, may have been the best yet!!  Travis bought us a Groupon a few months back for a couple’s massage in Atlanta.  I know, he’s a keeper!  Since Atlanta is two hours away, we decided to make it a mini-vacation and stayed the night!

He took the day off so that we could get a head start on the weekend.  We dropped Henry off at mom and dad’s (Clara still nurses, so she came with us) and hit the road at 9AM.  Not 30 minutes into the trip, the salon calls and tells me that they would have to reschedule our massages.  UGH!  It actually turned out fine – we rebooked for December and will just have to take another mini-vacation.  Now that I think about it, it couldn’t have turned out better.

Our first stop – Mall of Georgia for a coffee date with the beautiful Tina! 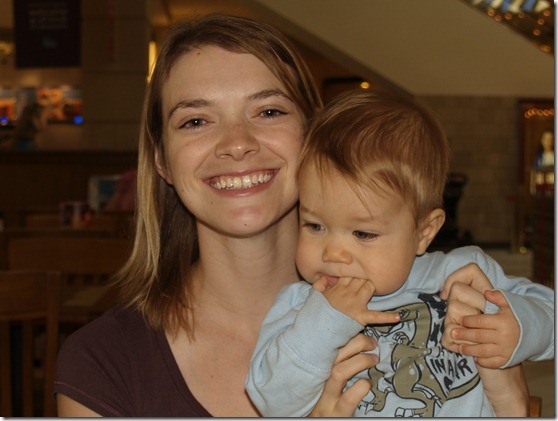 Tina blogs at FaithFitnessFun and is as nice in person as she comes across on her blog!!  She even drove for 40 minutes (one way!!) just to meet me!!   We talked about our family’s, our faith, fitness, and just about anything else we could squeeze in.   I’ll be honest and say that I was a bit starstruck – so much so, that I forgot to give her the canned green beans and homemade jam that I bought as a gift.  Next time, Tina!

After coffee, Tina had to pick up her daughter, leaving Travis, Clara and I to shop the afternoon away. 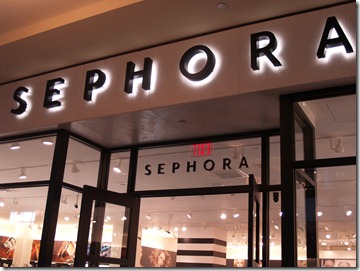 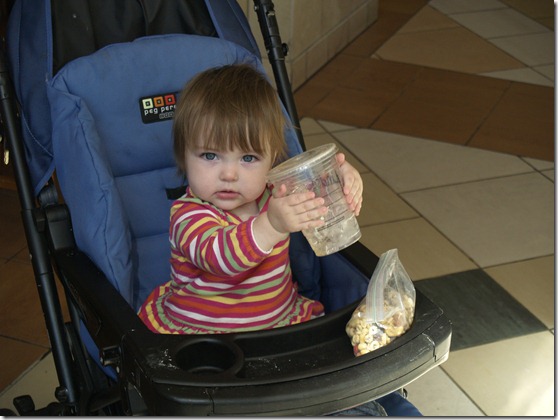 Hat fun – (sidenote: Travis and I both have ginormous heads and hats don’t really fit all that well.  Big brains = big heads.  Or at least that’s what my mom always said.) 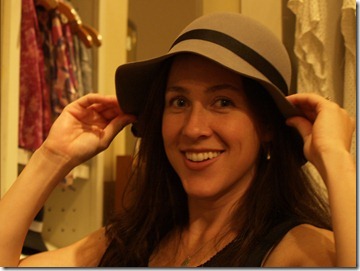 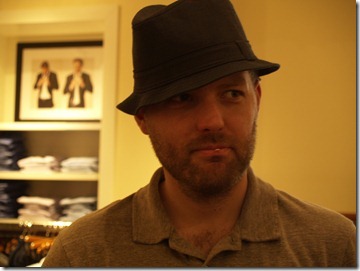 We finally made our way downtown and checked into our hotel.  After unpacking, we headed out on foot in search of dinner – starving by this time!!  Walking around in a city just makes me feel so grown up.  Strolling my daughter around, with husband beside me, makes me feel even older. 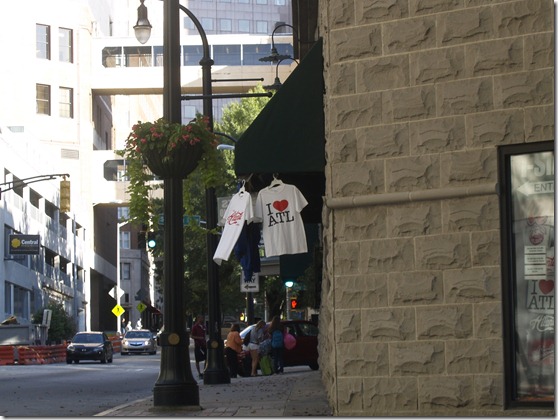 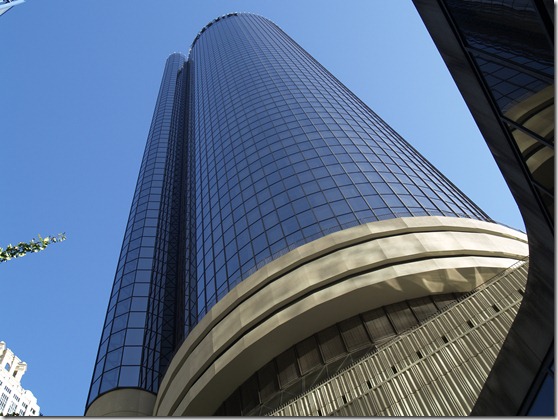 We wandered around in hopes of finding a sushi place, but when I saw this quaint little courtyard, I knew I’d found the place.  Truva is a hip little Mediterranean restaurant, complete with nightly belly dancing and a full bar.  Since Clara can’t be trusted around alcohol (or bellydancers for that matter), we enjoyed the open breeze dining outside. 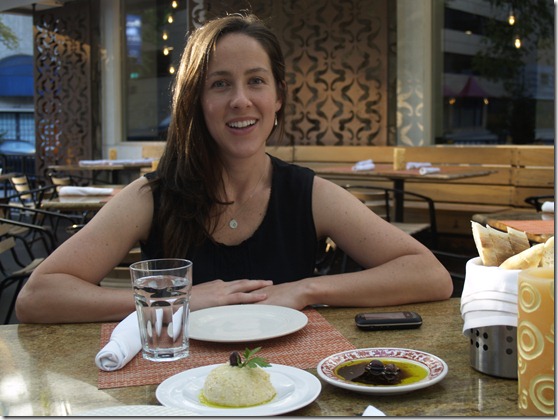 Of course, we had to start out with some hummus and pita bread. 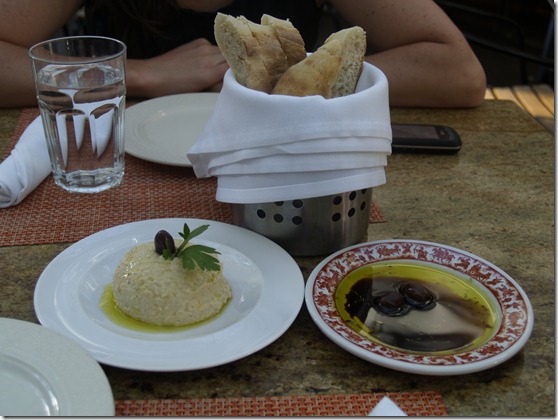 It was just a tad chunky for me.  I think I’ve been spoiled by making my own. 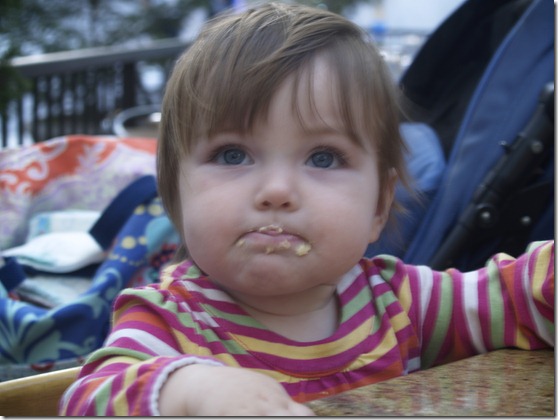 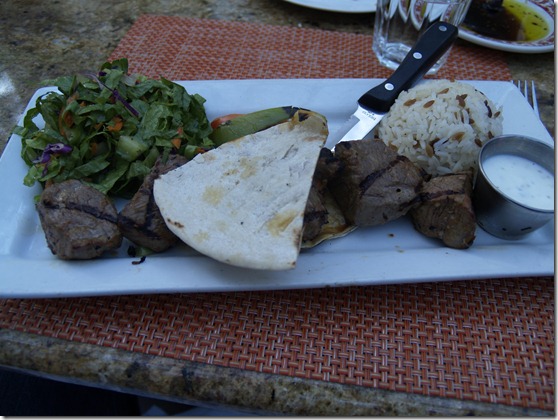 I was in the mood for a little less meat (October IS Vegetarian Awareness Month, as I’m sure you’ve been told), so I went with the Stuffed Eggplant – which actually DID have beef, but I was totally fine with that.  Beef are people too! 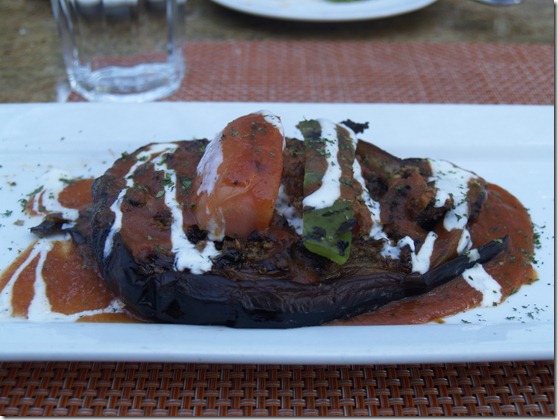 Stuffed Eggplant (Karniyarik) – Roasted Eggplant, stuffed with ground beef, onions and a touch of garlic.  Drizzled with tzatziki and a sweet tomato sauce.

After dinner, we walked around Centennial Olympic Park (a wonderful park downtown, created for the 1996 Olympics and paid for, in part, by Atlanta citizens and other patrons who purchased bricks to pave the walkways).  We probably spent 45 minutes trying to find the names Travis, Lindsay, Henry and Clara written in the bricks.  FAIL!  Dizzy from looking down and squinting, we decided to head back to the hotel and call it a night.  (I may have made Travis pay $5.40 for a piece of hotel carrot cake – it was horrible – noted).

I had high hopes of waking up and using the hotel’s gym, but chose sleep instead.  Sometimes you gotta.  The Holiday Inn that we stayed at didn’t offer breakfast, so we quickly got ready and headed to Trader Joe’s in search of some food and groceries. 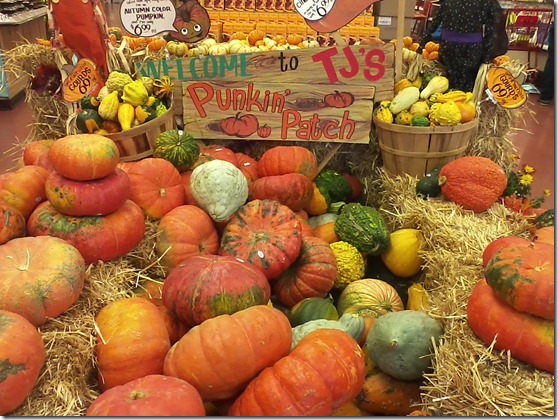 As soon as we arrived, we scarfed down a Clif bar and some fruit leather.  Paired with free coffee in mini cups (that I went back and refilled twice), we were ready to shop.

I actually only took one pic because they don’t like it when you take pictures.  What’s up with that, Joe?? 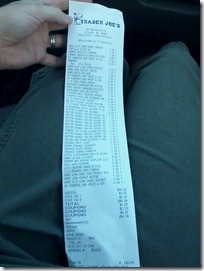 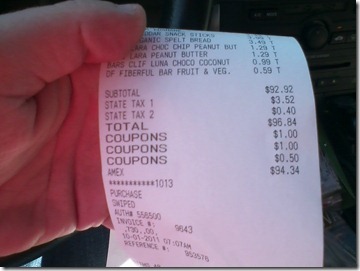 Notice though, that I DID use coupons.  Sad that they didn’t double (NC is a “coupon doubling” state – are other states like this?)  Included in our booty:

On the way out, we stopped next door for even MORE coffee.  Iced Grande with one shot of pumpkin = fall bliss.  Then headed to IKEA! 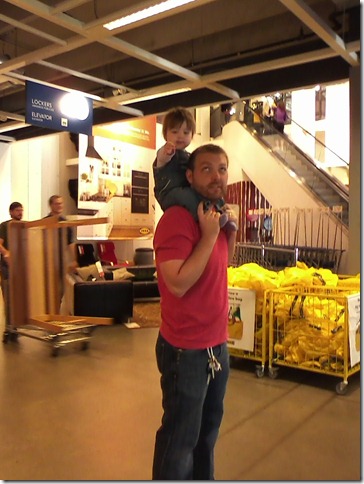 Found this for you, Janetha! 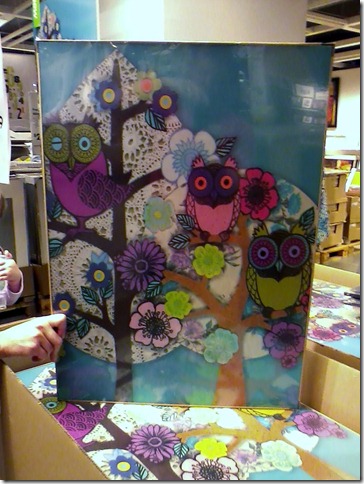 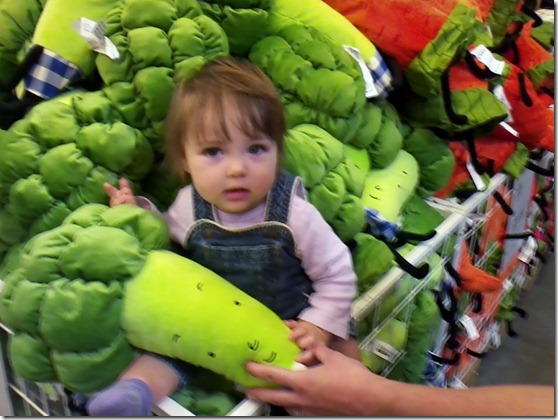 It was Travis’ first IKEA experience and I didn’t want to overwhelm him, so we only stayed two hours and spent $100.   That’s actually pretty good for a store that I could easily spend all day in.  The loot:

(geez this post is long – I’ll try to go faster)

After IKEA, it was lunchtime.  Our original plans included having Travis’ sister, Camila, watch Clara while we got our couple’s massage (she lives in Atlanta).  Even though the massages were rescheduled, Camila still wanted to see us.  So we met her at Piedmont Park, a huge park downtown that features bike paths, running trails and a huge pond.  On Saturdays, they even host a Farmer’s Market. 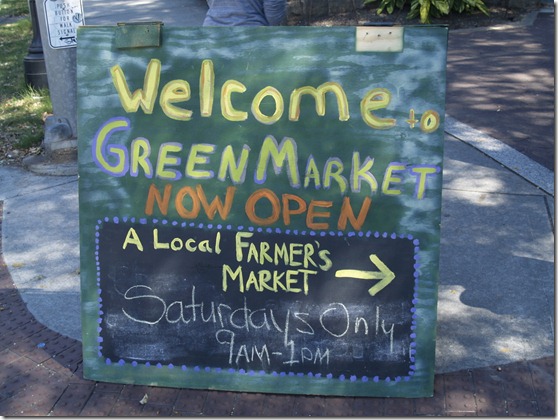 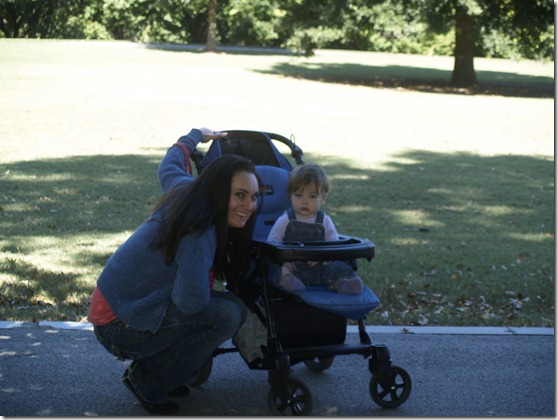 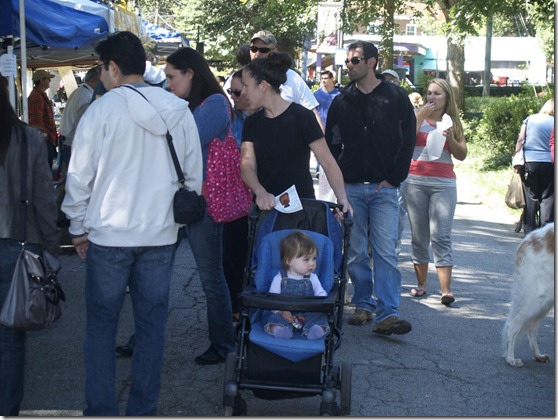 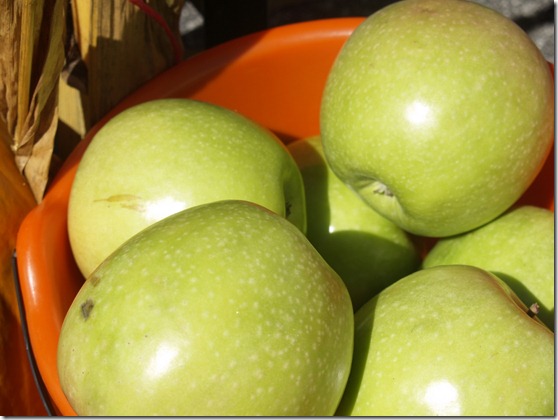 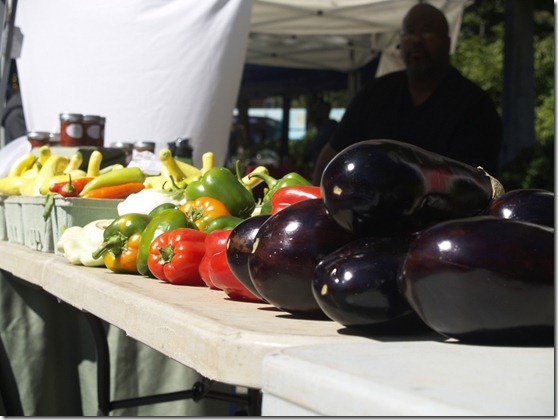 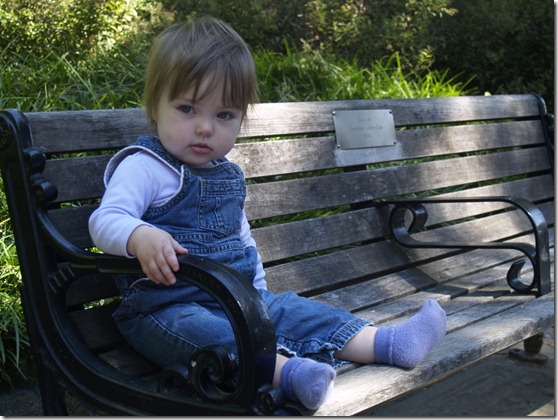 Travis and I left Clara with her trusty babysitter and headed to lunch.  We actually just started walking and decided that when we saw “the spot”, we’d eat there, not knowing what “the spot” meant. 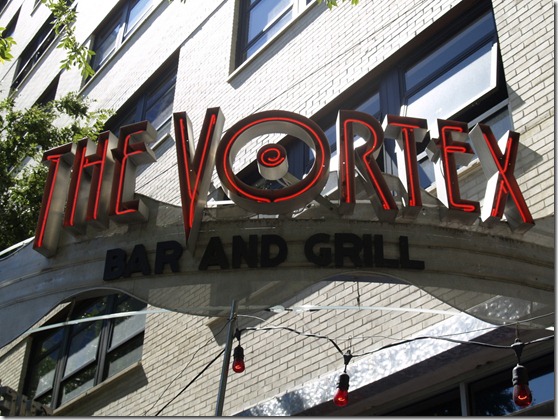 Turns out, “the spot” is The Vortex.  This place was AWESOME.   If you’ve watched Man Vs. Food before, you might recognize it – Adam went there.  Decorated with naked ladies, skulls and motorcycles, the Vortex was kinda overwhelming at first.

But the food spoke for itself!

Travis went with the Daily Special, the Country Breakfast Burger. 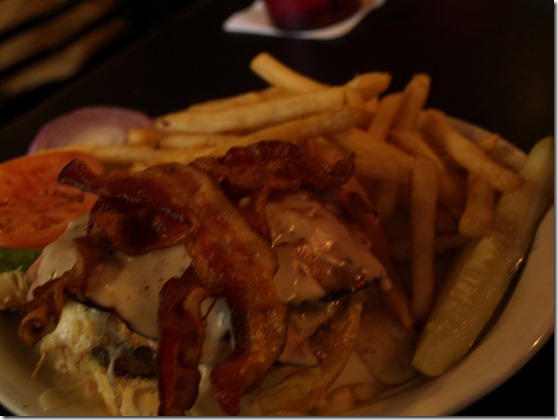 A Sirloin Burger, topped with Bacon, Ham, a Fried Egg and White Gravy.

I snagged a few bites – it was SO good!  The only way to describe it is “breakfasty”.  The gravy just put it over the top! 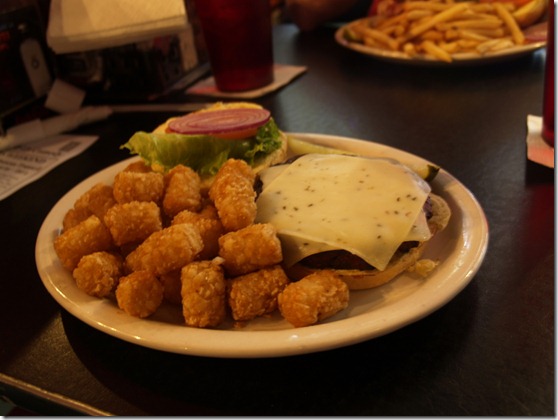 And you KNOW I had to go with the tator tots!!  Reminds me of Elementary School lunches…and Napoleon Dynamite. 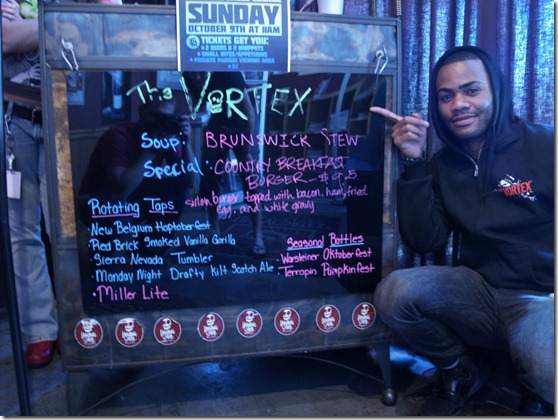 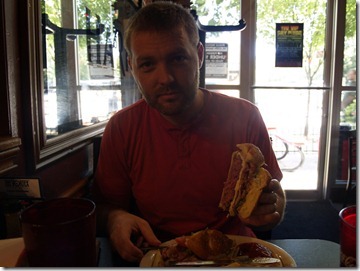 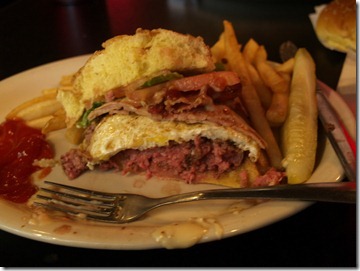 After lunch, we found Camila and Clara back at Piedmont Park, loaded up with full bellies and hit the road.  We got back to Franklin around 5pm.  Our house was 59 degrees inside!!!  WHAT?!?  Hello Fall!  After unpacking and picking up Henry, we took the kids for a lazy 4 mile walk to welcome in the new season!

It really was a LOVELY weekend.  And like I said before, we get to do it all over again (WITH massages this time) in December!   So blessed!