I’m not really one to boast about new things that I buy.

Probably because I make little money and live on a cash budget, so there ARE NO NEW things that I buy.  (Heck, I’m so cheap that I reuse paper plates if they only have crumbs on them.  It’s better for the environment, right?)  When we do have extra money it either goes towards something for the kids or into our vacation fund (Colorado ski trip!!)

Suffice to say that you probably won’t get many posts like this one, bragging about new buys.  Bragging about how awesome I am, well, that’s a daily occurrence, so get used to it.

Look what I got! 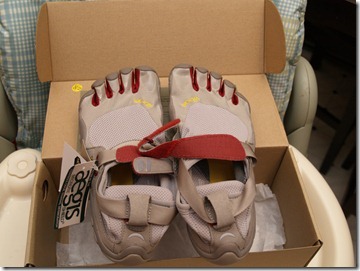 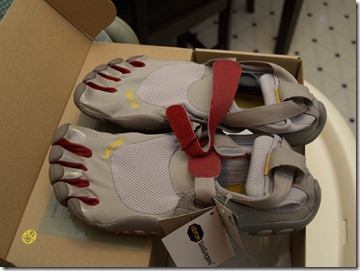 Vibram 5 Fingers!!  If you aren’t familiar with these little guys, you’ve been living under a rock.  Or maybe you’re just a normal person who doesn’t waste time reading fitness blogs.  I’ve learned from reviewers that you either LOVE them or HATE them.  After having only run in them one time, I can’t really give a full review just yet, but I THINK I’m in the LOVE category!!

Our local outfitter, Outdoor 76, was having a sale this week.  If you brought in 10 cans for the local food bank, you got 40% your entire purchase!!   Since I’m the couponing queen, I already had a stash of Chef Boyardee (that I got for FREE I might add) that I was going to donate anyway.  Combine that with a couple of cans from Mom’s house and ta-da!!!

$60 Five Fingers!!  I almost wish I had bought myself another pair.  Or maybe some to send to Janetha and Bonnie!

Instead I bought Travis a pair as an early birthday present – it isn’t for another month.  I thought about keeping both pairs hidden in the closet and waiting until his birthday to surprise him….but I’m selfish and wanted to try them out immediately.  Luckily, he wasn’t too bummed.  In fact, due to my early onset Alzheimer’s, I’ll probably just forget that I bought him these and get him another birthday present in addition.  I have a tendency to forget things: birthdays, people’s names.  There was one occasion where I found this super awesome pair of shoes, bought them, and when I got home, saw that I already had that.exact.same.pair!

(Travis is shaking his head and smiling in agreement as he reads that.  And making a mental note to start bookmarking guitar sites to lead me in the right direction.) 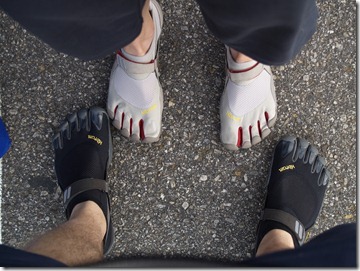 I couldn’t wait to try these bad boys out!  So first thing this morning, we went to the gym.  Travis lifted, and I ran.  My plan was to run 3 or 4 miles to ease into the shoes.  I’d heard from various friends that you really need to start out slow with the Five Fingers because they force your body to run in a completely different way than regular, cushiony running shoes.  I even thought ahead and packed my Asics and Thor-los, just in case I needed to revert back. 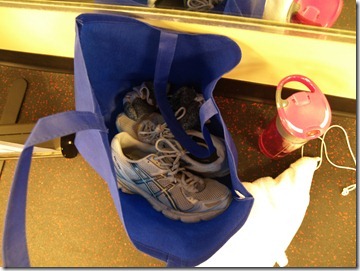 Totally unnecessary!  I was able to go for 4.25 miles with ease.  For the first two miles, I couldn’t really tell any difference between the Vibrams and my Asics.  As I got towards the end of the 3rd mile, I started to feel various muscles in my feet and calves that I normally don’t notice.  I’m hoping that I won’t be too sore tomorrow. 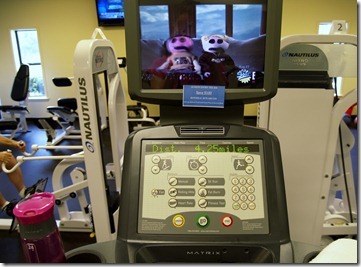 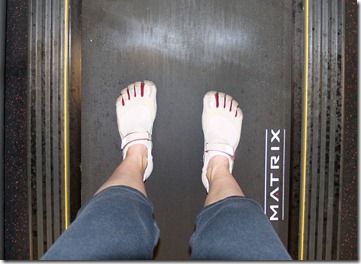 Overall, my first experience was GREAT!!  I plan on wearing them to group fitness classes (Bootcamp, Step, and Power Flex) this week and will give a more in-depth review then.

Travis finished his lifting regime with a mile on the treadmill.  While walking to the car afterwards, we both agreed that they were pretty awesome shoes.  He said, “I did well” picking out his gift.  And that I was the best wife anyone could ever have.  And that he wishes he could be more like me.

At least that’s what I think he said.  I can’t really remember.

I’m off to get a pedicure with Mom and Katy!  Have yourselves an awesome, awesome weekend.  Hug someone.