We all need it.

And we should all give it away.  And sometimes, for whatever reason, that’s hard to do.

I took a poll on Facebook, asking the simple question:

“What’s stopping us from ENCOURAGING one another?” 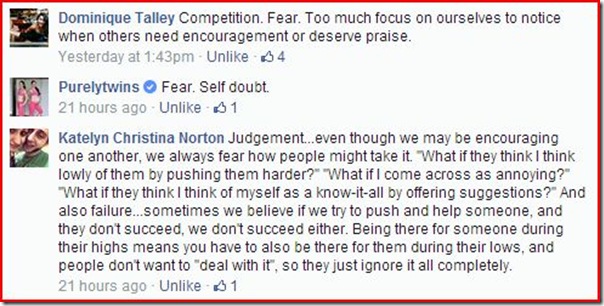 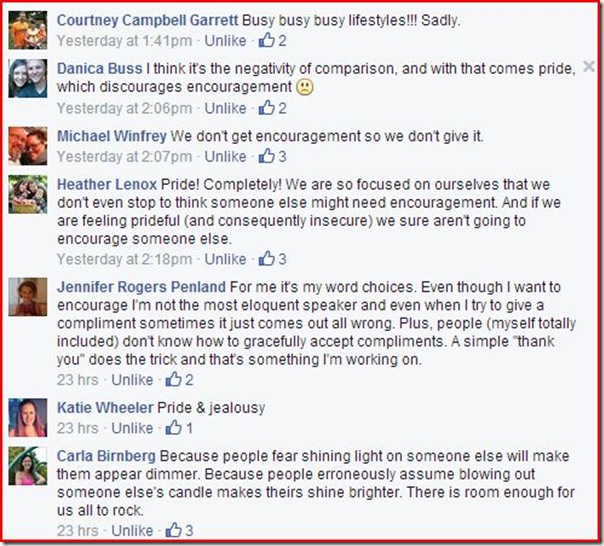 Pretty sure those aren’t fruits of the Spirit.  Actually the exact opposite.

Unfortunately I have people in my life that wouldn’t be sad if I failed.  Not that they’re out to get me (lol) but they wouldn’t be heartbroken if I didn’t succeed in these things that I’m putting my hands to.  As much as that saddens me, I get it.   I have those feelings sometimes.   They’re fleeting and last only a split second but they come.  I’m betting (because you’re a human reading this post and not a robot) that you might have these feelings too.  The thing is this –> those “enemies” are the people we’re called to love on.  And support.  And encourage.  It’s easy to love on your friends.  It’s quite a different story when it’s someone who doesn’t have your best interest in mind.

I want to be someone you’d want on your team.  Because I add and I don’t subtract.

And I want to support you no matter who you are.

Because I’m called to do so.  And because I really do want to see you succeed!

QUESTION:  How can show support for one another??  What gets in the way of that?