Before I start , I must say happy birthday to my mama!  I love you!!  Thanks for being so amazing!

I’m in a mood.  The mood to ramble.  None of this will make any sense all put together, lots of grammatical errors (Janetha is gritting her teeth) and there might not even be pictures.  You should probably get a beverage of your choice and an unhealthy snack.  I’ll wait.

(Did you pick a sugary cereal??  I totally would have.  Right now we have these things called, “Good MOREnings,” which are like Cheerios but they’re VANILLA flavored!!  A great find at Big Lots.  Go get some.  But not right this second.)

We’re so close to being done with our house remodel – I can feel it!  One more room to paint, then the floors to refinish, then MOVE.  I’m thinking we’ll be in by the first week of April.  You might not remember (as it was literally SO long ago), but we bought this house back in AUGUST of last year!  That’s NINE months of remodeling work.  Weekends spent doing tedious work.  Sleepless nights.  Ok – there were no sleepless nights.  Had you told me it would have taken this long, I would have laughed in your face.  Because we bought a house that was “move in ready.”  My butt.

A joke (provided by my lovely friend, Maddy, who probably made it up herself – bless it.)  “What do you call a cow on the floor?”  Answer – “Ground beef.”

I’ve gotten into the habit of NEEDING an afternoon cup of coffee.  Not good.  Especially because I pair it with a peanut butter bar or something else that’s super sweet (<-side note – I don’t really like coffee with salty foods.  It pairs best with sugar.)  Every day I aim to wean myself from that second cup and every day I fail.  I’m ok with that. 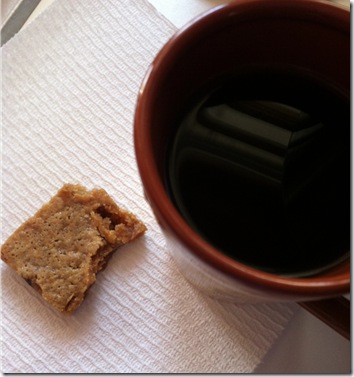 I was thinking the other day about something.  I really HATE dressing my children.  Like the physical act of putting on clothes and matching a top to the bottom – bleck.  I can’t get with the program.  Unfortunately, this lack of desire does not bode well with my mother and mother-in-law.  I believe the word, “scragamuffin,” has been muttered under their breath on multiple occasions and not always directed at my children.  P.S.  I don’t do hair either.  Mine or Clara’s.  I should feel bad about that but I really don’t.  It’s not a battle I’m willing to take on.  Meh.

A battle I am willing to fight?  Creating more time for my husband and I.  With the house, tax season (travis works at a tax software company), the show and all the other crap we have going on, it can seem like we’re two ships passing in the night.  I don’t like that.  I want my ship to rub up real close to his ship.  <-yup.  I wrote that.  Pow.  Ship date coming this weekend! 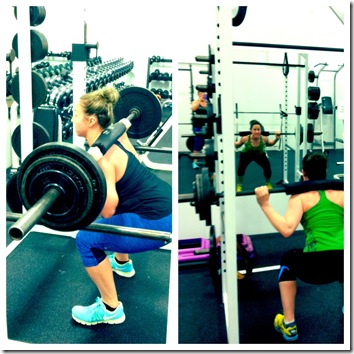 I’m this close to being good at getting up in the mornings to work out.  If you could see how far apart my hands are right now, you’d understand the this better.  Why is it so much harder for me to put my contacts in my eyeballs at 6AM versus 8AM?!?!  It stings.  Am I alone in this??  I’m bringing back the, “glasses are chic in the gym,”-look.  It’s going to be a thing.

A moment of honesty here.  Henry wore these socks for a full day before I noticed that they weren’t exactly made for a nearlyfiveyearold person.  I hate to perpetuate this 90’s joke, but, “Lindsay, here’s your sign.”  Winning at momhood.  That’s me.  P.S.  After I took this picture, I didn’t run back to the bedroom and grab another pair of socks.  He kept wearing these infant socks for the remainder of the day.  May I remind you that I hate dressing my children? 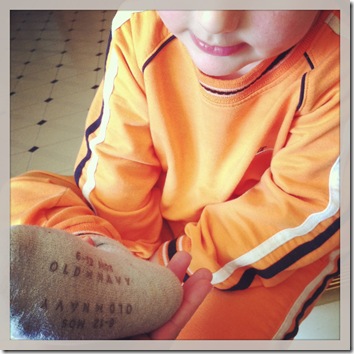 “What has lots of eyes but can’t see?”

QUESTION:  Tell me something random.  Anything.  Or the latest joke you heard.

**To be fair to Maddy, she did give me these (a little bit funnier) jokes in addition to those (less funnier ) ones above:

“Did you hear about the guy who got in a wreck last week and lost his left arm and leg?”  – “He’s alRIGHT now.”

“How many tickles does it take to make an octopus laugh?”  Answer – “Ten-tickles.”

Memorize these for your water cooler meetings.