This post is part of my ongoing sponsorship with fitmixer!  As an ambassador, all thoughts and opinions expressed are my own.

Simon says, “raise your hand if you don’t like change.”

Simon says, “raise your hand if you’d prefer life to be simpler.”

Simon says, “raise your hand if you like to laze around in fuzzy socks and not get off the couch for hours at a time and watch Downton Abbey whilst throwing Cheerios up in the air one by one and catching them with your lizard-like neck action.”

You can’t raise your hand.  Because you only have two and Simon didn’t say to put them down.  Off with your head!

Lame.  I’m sorry.  That intro really had absolutely nothing to do with this post.

Anyway, for this month’s prompt, we have to come up with SOMETHING NEW that we’d like to do/accomplish in 2013.  I love it!  I’ll try anything once (enter a pole dancing class when we lived in Denver – great, greasy fun) and just have fun making a fool of myself.  Sometimes I get things on the first try and other times…I’m…me.  Clumsy, uncoordinated and ridiculous.  I think it’s all in your approach – if you go into something NEW with arrogance, you’ll probably end up looking like a hot mess.  BUT, if you go in with confidence, you might just be awesome (I do believe I won an award in that pole dancing class.  All-time Best Brunette Gyrator.  Because you just don’t go up against a blonde gyrator.  You’ll lose.)

So my NEW venture??

Take A Self Defense Course!!

And I’ve already found the one I want to take!  It’s called, “Fight Like A Girl,” and the class is offered over the course of a few weeks at my local community college:

Fight Like A Girl is centered on the “Stay with People” principle and covers the most common sexual assault scenarios. This module is especially effective for attacks in parking lots, parking garages and other areas where it is imperative that you not be taken to a secondary location where you can be raped and murdered. The innovative method developed here is to start students in the worst position possible — the attacker has you pinned on the ground and is in between your thighs.

Students learn to effectively defend against this position as well as chokes, hits, and grabs. They learn to escape the dreaded and deadly “blitz” attack from behind as well as how to defend their space. 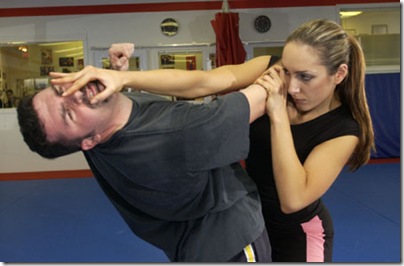 I think it’s so important for women to know how to defend themselves in the case of an attack.  I run by myself and/or with the kids all the time on a greenway where something could easily go wrong.  I feel like I’m pretty strong physically, but I have no idea how to ward off an attacker (where to hit, how to hit, the best places to focus).  I think that after taking a self defense class, I’ll be better equipped should something ever happen.

I’m not sure why I’ve never signed up for one of these before, but I’m making 2013 my year to do this!

fitmixer is giving away a 2 pound bag of any of their products to one lucky reader!  To be entered to win, all you have to do is head over to their site and write one new thing you’d like to try in 2013!   Good luck!!

QUESTION:  Tell me some NEW things you want to try in 2013!  Have you ever taken a self defense course??