There haven’t been many times in my life when I’ve been in shock.  Like literally blown away.

I think finding out that we were pregnant (all three times) was a surprise, but never a real shock.  I suppose that could be attributed to all the unprotected sex.  ;)

Meeting Travis and discovering that he had NINE brothers and sisters (now SIXTEEN!) was a fun surprise.  It just meant holidays would be extra loud and there would be birthday celebrations nearly every month.  More cake for me.

Hearing that the sellers accepted our $150,000 offer on a $199,000 house.  That was a wonderful surprise – now if only we could finish the renovations and move in!

I would definitely consider my life pretty even keeled.  The highs and lows have never been REALLY high or REALLY low.  More like hills and dips instead of mountains and valleys.  And I know that I’m blessed to be able to say that.  So very blessed.

All that being said, this past Friday, for the first time in a very long time, I was FLABBERGASTED! 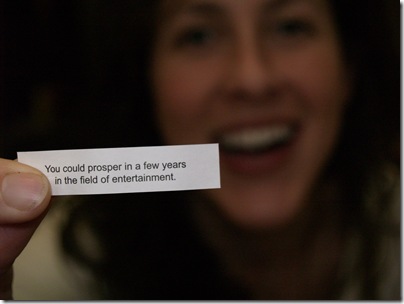 I wasn’t even sure if I would audition.

I have a continuing education test coming up at the end of February that I desperately need to study for.  New classes at the Fitness Center.  And two kids that are by my side all but two hours a day.  The blog.  Freelance writing.  A husband to tend to.  Busy.  I’m busy.  (and yes, I know.  I do this to myself.)  The day of auditions, I asked Travis if I was taking on too much, maybe I should just skip this show.

He said I could handle it.

So I went to auditions.  I even dressed up and wore my hair down.  For any of the Overlook Theater’s productions, you don’t audition for a PART.  You just audition.  You sing with a group and then by yourself.  And you read lines for multiple parts.  So I sang.  And I read.  And I went home.  Knowing that I’d be in the show, but surely not have a significant role.

In your body, the muscle responsible for causing a desired motion is called the prime mover, or AGONIST.  The muscles assist the Agonist to perform the desired motion are called SYNERGISTS.

Off stage, I’m an AGONIST, through and through. I get things going. I like being in charge, first-in-command. I THRIVE off of control (often much to my demise).

However, on stage, I am a SYNERGIST.  A supporting role.  A backup dancer/singer/performer.  Few lines.  Less responsibility. 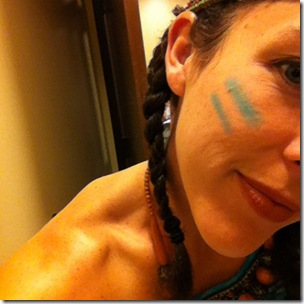 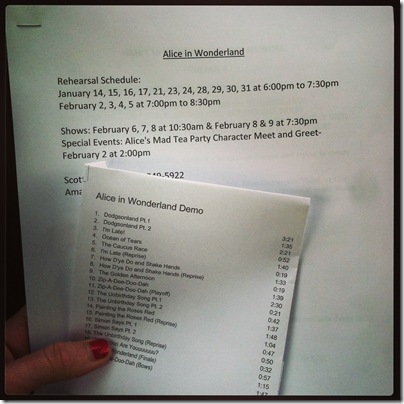 To say that I’m SHOCKED would be an understatement.  I don’t get these roles.  I don’t even know if I can memorize all these lines!  I’ve never acted before – not REALLY.  I never took drama growing up – this is my adult hobby.  And speaking of adults, Alice is supposed to be a young girl.  Which I am, in fact, not.  The sagging boobs give me away.

Yet under all of my self-doubt and pre-show nausea, I KNOW I CAN DO THIS.  I’ll memorize my lines.  I’ll dance my butt off.  Sing like a bird.  Hit every mark.

I’ll do all of this because I’m an AGONIST. 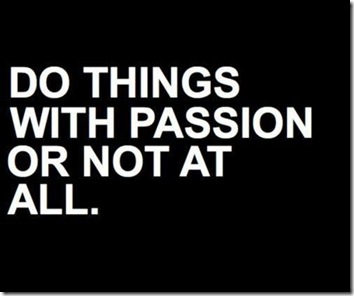 QUESTION:  Have you ever acted before?  Any tips on memorizing lines?  Would you consider yourself a Synergist or an Agonist??