Remember when you were in Middle School and you went around wearing your jeans rolled.  Maybe you aren’t that old.  Let me explain….You take a handful of jean fabric at the bottom (inside of the leg – outside was for losers), vertically fold it over itself, then start rolling from the bottom.  Instant style.  (And surprisingly convenient if you were riding your bicycle later.)

Now that I think about it, we were just way early to the Skinny Jean party.

Anyway, I did that in Middle School, the rolling.  AND I had bangs that started on the crown of my head and went forward, curled tightly against my forehead.  AND I ASKED for braces.  Asked for.  As in, it was cool to have braces.

Some I got from popsicle sticks.  Some I made up myself.  But most of them were just repeats of the same jokes going around the school.  (Lots of “Yo Mamma”, which even then, I felt horrible for saying.  But I did it anyway.) 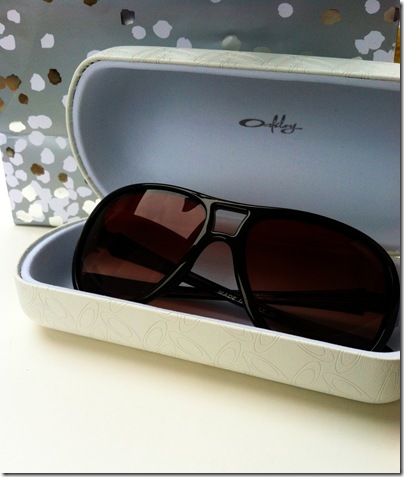 Last week, I received this SWEET pair of Oakley Women TwentySix.2 Tortoise Sunglasses from Sunglasses Shop (in RECORD shipping time, I might add) and all I could think about was that Middle School joke….

My future’s so bright, I have to wear shades!

(Which I suppose isn’t really a joke at all, but more of a saying.  I still think it’s funny.  Mostly because it was TRUE.)

After I made that silly joke (in my head, then to Henry, then finally, to Travis), I started really examining the Oakley Sunglasses.

I don’t own expensive sunglasses, never have.  I’m always fearful that I’ll lose them or have them stolen.  But after getting this pair and wearing them around all week, I kind of want to get more.  These aviators fit perfectly and don’t pinch your nose or right behind your ear like some other sunglasses do.  They came in a white hardshell case, which is perfect for travel.  They also provided me with a soft, fabric case, which doubles as a cloth to clean the glasses! 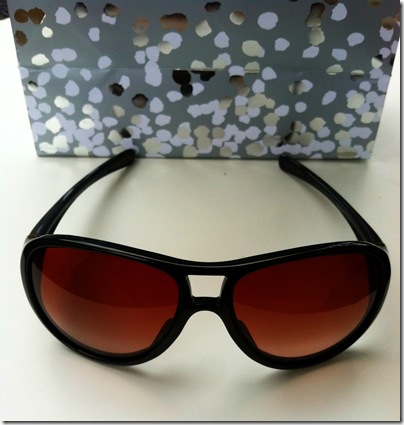 A HUGE thank you to Sunglasses Shop for giving me the chance to review these Oakleys!  I absolutely love them!

Sunglasses Shop has graciously offered to give one LL reader a FREE pair of Oakley sunglasses!!

Tell me what pair of sunglasses you would choose.

@lindsays_list has paired up with @sunglassshop to give away one FREE pair of Oakley sunglasses!  Enter here:  http://wp.me/p1Mp21-3zi #giveaway #futuresobright

This giveaway will be open until Saturday, December 22nd.  A winner will be announced on Sunday, the 23rd.   Happy entering, my friends!