So yes.  I hope you read watched yesterday’s post and were able to decipher the toddler language. 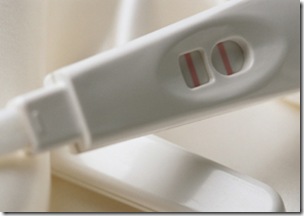 And couldn’t be happier.

(except that currently I’m really NOT happy with this morning all-day sickness that has completely debilitated me.  More on that in tomorrow’s “What I Can’t Eat Wednesday.”)

They say the third times a CHARM and I can’t help but get excited about sharing one of my pregnancies with you guys.  When I started this blog, my infants had grown up into one and three year olds, so I’ve yet to chronicle a pregnancy online.  I thought I’d answer any questions by making up my own pregnancy survey.  Enjoy!

How Far Along Are You?

By all of our estimations, I am around 9 weeks.  I won’t know for sure until I go see my midwife next week.  She won’t see patients until they are past 8 weeks gestation.

Of course.  I wanted to wait to get pregnant at a time when I KNEW that the baby wouldn’t arrive near Blend Retreat.  Though I’ll be super huge by Blend, I still be able to fly (something I was a little worried about).

2 months.  I hope that no one reading this thinks that I am bragging, but we have had no problems getting pregnant with any of our children.  Humbly blessed!  And I’m even more thankful because we’ve been successful, despite my ED past.  I know that many recovered anorexics have difficulty in this area.

How Did You Tell Travis?

Since we were actively trying to get pregnant, it came as no shock when I asked him to pick up a test on the way home from work one day.  The next morning, I took the test and it was negative.  Wah wah.  I just KNEW that I was pregnant though.  A few days later, I took another test (two come in a pack) and this time – POSITIVE.  I called T into the bathroom to show him.  I don’t exactly recall, but I’m pretty sure he used the word, “super sperm.”  Something like that.

How Did You Tell Your Family?

Before I answer that, I’ll tell you how we told with the other two. For Henry, I ordered a t-shirt (I think from Café Press) that said, “We’re 50% sure it’s a girl.”  Travis thought that was a hoot.  I was too sick to care.  We invited both sides of the family out to eat and halfway through dinner, I took my jacket off and waited until someone read the shirt.  FINALLY, Travis’ sister read the shirt and started screaming.  Lots of fun memories from that reveal – Henry was the first grandchild on both sides, so his announcement came as a great surprise.

For Clara’s announcement, I knew that I wanted to involve Henry in some way.  We found out that we were pregnant with her right after Thanksgiving ‘09, so we waited to reveal it on Christmas Day.  I made a shirt for Henry that said, “I’ll be a Big Brother,” and had him open it in front of everyone.  Again – a great surprise. 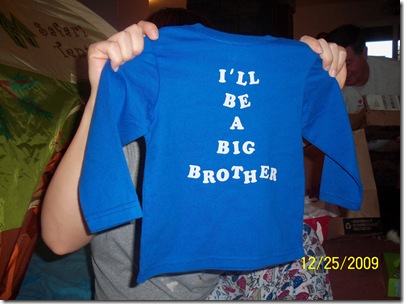 This time…..nothing special.  I’m sicker than sick so I knew that we had to tell them sooner versus later.  There were no special shirts or presents.  It was just me telling each side, normally in a conversation, and then promptly asking for a saltine.  Totally fine by me – I’m sure they weren’t all that surprised.

Have You Gained Any Weight?

I don’t weigh myself (and I haven’t since I was pregnant with Henry), so I have no way of knowing.  If anything, I’ve probably lost weight, due to the fact that I can’t eat anything right now and throw up.  If there are any readers out there with a magic morning sickness cure, please divulge!

**And since I know someone will ask, I don’t plan on being weighed for this pregnancy.  My midwife has no problem with that request.**

Will You Find Out The Sex?

No.  Not this time (we found out with both Henry and Clara).  We already have all the clothes for either sex, so we’re holding out for that delivery day surprise!

That’s every question I could think of that might be entertaining for you guys.  I have decided NOT to create a separate baby page like I see so many other blogging mothers do.  Instead, I’ll simply write about my pregnancy when it comes up, naturally.  It won’t be everyday, but it won’t be just once a month either.  In fact, like I said, I plan to write about morning sickness for tomorrow’s WIAW.

Now it’s your turn – any questions that I missed?  Ask away!