Happy Memorial Day!!  We’re all still sick, but heading to the lake anyway .

While we’re coughing on the jet ski and eating BBQ, I asked Travis to write Part II of his guest post series.

I hope you enjoy and that he continues to write posts in the future (hint, hint).

Last time, I devoted an entire post to attempting to open your mind a little, specifically so that you don’t just dismiss what I say today completely.  I wrote an article decrying the uselessness of the “People who X tend to Y” finding.  So here’s why:

I haven’t eaten breakfast in 8 months.

Well that’s not completely true. You see my mother cooks breakfast twice a year – once at Christmas and again on Easter. This year she was in China during Christmas (Lindsay has either already told you about that or one day will), which led to the infamous, Biscuits and Powdered Sugar Gravy.  But I ate breakfast that day nonetheless. So, in the last 8 months I’ve eaten breakfast only an handful of times.

I know, I know.  You’ve read it probably a hundred times in all different shapes and forms, “People who skip breakfast tend to be fatter”.

Everyone’s read/heard that?  If not, you are actually better off.  Now for the boom (not as in an explosive boom, more like as a sailing term where you are knocked off your feet by an hundred pound rigging smacking you in the face).

First, I want to combat the “People who skip breakfast” “studies” (if we were speaking face to face studies would be in air quotes, to indicate I am using irony in employing that term).  If you look at the data for this “fact” (in person air quotes again) you’ll see the vast majority of people polled (and actually poll is more accurate than study with these.  No experiments were done.  They took a lot of people, weighed them and asked if they ate breakfast) weren’t even slightly health conscious.  In fact, in one was this wonderful nugget, (paraphrase) “Do you eat breakfast every day?” “No, I normally just grab a donut from the break room at work.”  Which shows two things –  1. this person being fat may just have more to do with eating donuts every day rather than nutrient timing and  2. this person actually did ingest calories every morning.

And now for something truly fascinating.

Here’s something cool to think about, these studies actually become self-fulfilling.  See, this may be hard to believe but, those who care about their health are more likely to be healthy, and also more likely to read health articles, so those healthier people are more likely to 1. have read that eating breakfast makes them more healthy 2.care enough to take the advice.  So now even if breakfast has a negative effect on health you will still find that, those who tend to eat breakfast are healthier than those who don’t.  It’s the equivalent of saying people who read health magazines are healthier than people who don’t.  While true it does not follow that reading health magazines makes you healthier.

I hope I’ve now induced at least some doubt in the knee jerk, “That can’t work because if you don’t eat breakfast you’ll get fat” reaction.  So why aren’t I eating breakfast?  What am I doing? What has this guy been rambling about (building anticipation for) over the last week?

To keep this nice and organized let’s make a list of the W’s.

WHO is doing this?

Well that’s easy – me.  (In true Lindsay fashion, this is adding useless or already completed items to your list so you can build crossing-off momentum.)

WHAT is Intermittent Fasting?

Intermittent Fasting is fasting for a period of time very often.  There are a few different methods, but the most common method I’ve found and by far the easiest FOR ME (you should see that phrase “for me” a lot as I’m not suggesting this is for everyone at all) is fast for 16 hours, then eat for 8 everyday.  Which 8 hours you eat is completely up to you.  Heck if you wanted to you could eat breakfast.  But since Experimental Studies (these are the real ones) have shown that eating your carbohydrates as late in the day as possible is the best for losing weight, I wouldn’t suggest it.  (Yes it’s true all that, “eat your carbs early in the day or no carbs after 3PM” BS is just that, BS.  I’m sorry.  That’s for a different post).

That’s really the whole deal.  Find your recommended Calories, Protein, Fat, Carbohydrates, and get them all in an 8 hour window.  There are some other general ideas that seem to make it work a little better, like try to get half your protein in your first meal of the day, use a 50-20-30 PCF, train in a fasted state and break your fast as soon as you’re done etc.  But these are harmonies to the main melody of “take 16 hours a day and don’t eat.”  As you can see I’m not just suggesting you skip breakfast willy nilly lilly.

WHERE can I Intermittent Fast?

Well that’s another silly question but we can mark it off our list, so it’s worth keeping.

WHY I Chose Intermittent Fasting:

Last fall, Lindsay and I came across a list.  On my 25th birthday, we went out to eat (at Sweet Tomatoes) and created a list of things we’d like to accomplish by the time we were 35.  One thing that was on that list is I wanted to Bench Press 1.5x my weight.  For the me that’s existed since college that means roughly 300 pounds.  Now a couple of years ago, I worked my Squat up to 1.5 but I had to gain about 26 pounds, or 13% of my body weight, to do it.  I didn’t want to do that again, so I started looking around for protocols that would allow me to gain strength without gaining a lot of weight.

In my search I came across the acronym/philosophy “IIFYM”.  The acronym breaks down to “If It Fits Your Macros”, the philosophy is forget all the tips and tricks, if you ingest over a couple day period the correct amounts of Calories, Protein, Fat, and Carbohydrates, you will progress towards your goal.  Drinking 4 cups of green tea, adding chia seeds to your oats, eating vegetarian or not, and drinking ice-cold water, are all nice and fun and maybe give you a slight edge.  But in the long run they aren’t going to make or break you.

It was after adopting this mentality that I was introduced to Intermittent Fasting.

The thing is –  it’s like it was designed for me.  I’ve always hated the, “Try and half fill your stomach every two hours, so get used to being unsatisfied, unhappy, constantly low on energy, constantly hungry, irritable, and uncomfortable, permanently and for the rest of your life. ”  I enjoy the feeling of overeating.  I like a big meal I like to stop eating not because the food is gone or my plate is clean but because it hurts.

WHEN do I eat?

First on a typical non-workout day, I wake up, having stopped eating at 8 the night before, already 10 hours into my 16 hour fast.  I either go to work or find something around the house to do (boredom will get you more than hunger most the time).  Until Noon I’ll only drink water and coffee.  So here we are arriving at noon having ingested 0 calories in the last 16 hours.

I strive for this first meal to be quite large.  I really have to work at it.  In general I could eat 100 grams of protein meal at noon (for reference, if you don’t want to drink 3 fitmixer protein shakes; that’s 6 oz. of chicken, plus 6 oz. of beef, plus 1 cup of yogurt, plus 1 cheese stick, plus 4 egg whites. I shudder to think how a vegan would accomplish this – Heather?).

Then around 3PM, or as soon as I can stomach it, I drink a protein shake.  As you know we have been an Optimum Nutrition family, and without a doubt their new Performance Whey tastes better than any other protein powder I’ve tried (that’s saying something).  But recently I’ve been using fitmixer protein because you mix it with water and that makes it a lot less filling than mixing with milk.  (I know a new concept for you.  Most people are looking for their protein shake to be clean filling meal replacement that causes them to eat less.  Oh and BTW if this is you, you shouldn’t be using Whey.  Whey was designed for people like me who are looking to be as hungry as possible as soon as possible after ingestion.)

That’s normally about 3 in the afternoon.  But it will normally take me until 6:30 7 just to stop feeling full.  At which point I eat a “normal” sized dinner.  Sometimes I just can’t handle it so I eat a bowl of cereal or maybe a bowl of chobani-lovegrown-peanut butter type thing.  Then right at 8 I eat my nightly Ice Cream bowl. 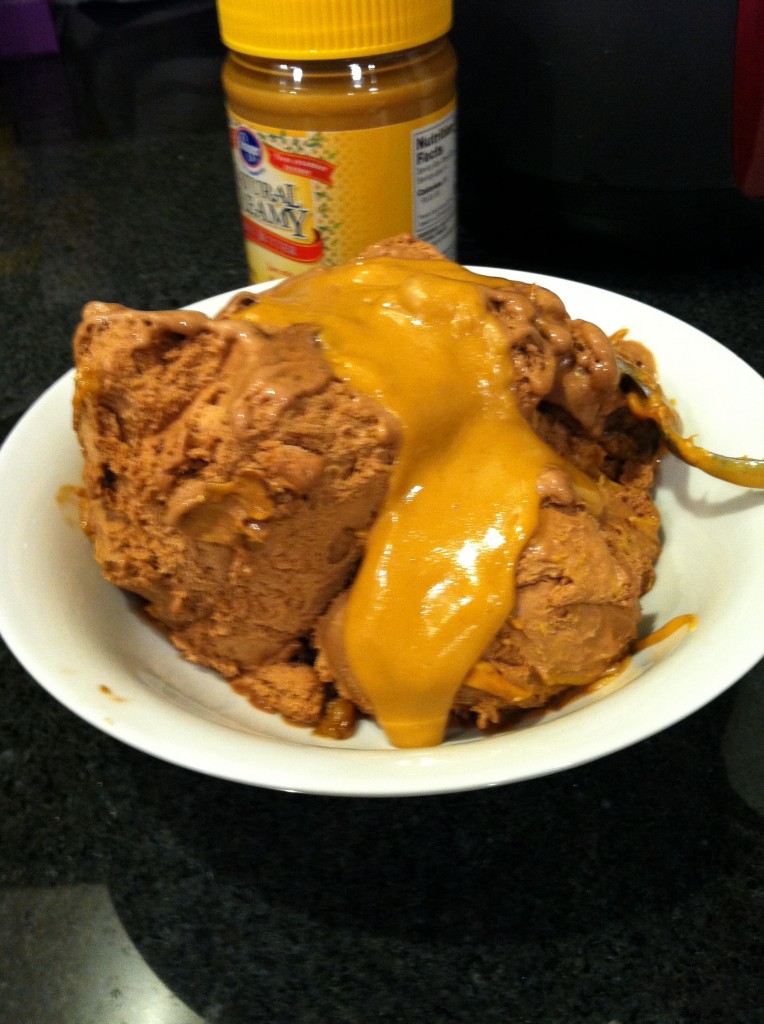 I have to work out at 6 in the morning.  It’s my only chance.  It’s a now or never kind of deal.  So I have to do a little something special on workout days.   On workout days to stave off catabolism, I drink a serving of aminos at 6, 8, and 10.  6 as a pre-workout deal – 8 when I get to work then 10 which will hold me to 12 when I “Break My Fast” and that meal as well as the rest of the day we’ve already discussed.

There are entire websites devoted to Intermittent Fasting and a whole wealth of information on what good it does your body to have it’s 16 hours of fasting.  There are quite a few studies, including one that just got released last week (though it was using rats which doesn’t always translate perfectly to humans).  But that’s all for another post.  For this one it’s enough to think of it as an eating plan that makes it easy to stick to your Macros.