**Catch up – Part I, Part II, Part III, and Part IV.  I swear, I’m almost done talking about myself!  And I apologize for the length of this post.  I found it hard to tie up all the loose ends.  I hope I’ve done an ok job.  Next week will be the last installment – My ED Today.**

As I wrap up this series, I want to be sure that people understand something.  Having an eating disorder doesn’t make you a bad person.  It just means that you’re battling your “flesh”.  And all humans battle their flesh.  What makes it bad is when you actively CHOOSE to do nothing about it – and worse than that, you actively CHOOSE to disobey that inner voice (aka, the Holy Spirit).  When you know that you shouldn’t make yourself throw up or not eat for 3 days, but you do those things anyway – that’s when you cross the line.  Most of the letters that I’ve received through this series have been from women and girls who KNOW that how they’re treating their bodies is wrong, but they just can’t do anything about it.

No.  You CAN.  You can make the choice.  Yes, it’s hard.  And yes, you might backslide a time or two in the process.  But each day, you’re given choices to start fresh.  Choosing your HEALTH over a number on the scale or a pant size is up to you.  The personal trainer in me wants to yell at you and say stop whining and DO something about it.  But, the recovered ED girl wants to give you a big hug and tell you that I’ve been in the trenches and come out.

I have ABSOLUTELY NO JUDGEMENT for anyone battling an eating disorder.

There is light.  Seek it out!

Here’s where we left off…

Spring and Summer of my Senior year, as I was gearing up to head to Carolina for college, I became even more obsessed with losing weight. I was still skinnier than I am now, but I was SO uncomfortable in my own skin. Knowing that I was about to encounter a whole new group of people, pushed me into a place of vulnerability. These would be people who didn’t know how good I was at running or how kind my family was. People who would judge on first appearances.

I searched for tips to lose more weight. That’s when I found laxatives and Diurex. So I added these to my arsenal and took all this baggage with me to college.

I was excited about going to college.  Carolina was my first choice and I even applied for early admission and got in.  My sister and I are those type of dorky people who ENJOY learning, so the thought of studying and going to class didn’t frighten me.

The people did.  Or rather, the girls did. 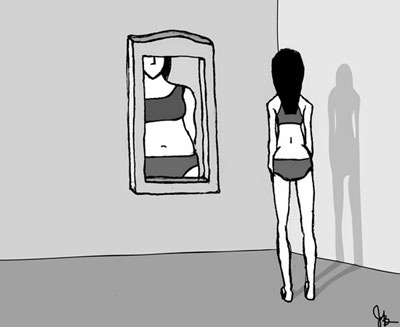 For the two years prior, I thought I looked fat.  I thought my size 4 clothes were too tight.  I was self conscious about what I wore, about how I was perceived, about everything having to do with my body.  I’m not sure where this stemmed from because I was getting positive reinforcement from my boyfriend, my friends and my parents.  My Senior year, I was elected to the Homecoming court and for yearbook awards.  Those external validations didn’t come close to helping my self esteem.

Like most colleges I’m sure, Carolina was teeming with bright, athletic young women.  Women, who I perceived as threats.  (I still sometimes feel this way about fellow bloggers – if I notice that someone is skinnier than me or works out more than me, I perceive them as threatening. RIDICULOUS!  Why do I do this?!!?)

Living with an ED at college was a bit easier than living at home, because I had more freedom.  I bought my own groceries, prepared my own food.  I had no one there to tell me when or what to eat.  By this time, I had moved past the days of starvation.  Instead, I adopted weird food rituals and relied heavily on LOW CALORIE foods.

(Notice that there is no protein.  Had I known more about nutrition, I would have probably restricted carbs.)  Most days, I would eat very little from breakfast until dinner, and then binge on bowls of cereal or nutrition bars.

I was still purging these binges, but again, this was WAY trickier since I shared a bathroom with 20 or so hall mates.  I’d pick a time of day when most people were out (having a social life) and then go “take a shower”.  Once under the sound of the water, I’d purge into the shower drain.

Thinking about that now, makes me shiver in disgust and embarrassment.  But that’s the truth – that’s what I did.

I also hid laxatives and diuretics in my private closet.  Way back in the back, where my roommates couldn’t find them.  I used them EXCESSIVELY – popping 6 or 7 laxatives at a time.  After months of this, it got to the point where they just stopped working.  This might be TMI (isn’t this entire series?), but due to my laxative abuse, I STILL have problems with my bowels.  Please use me as a warning!

This binge-purge/laxative abuse cycle lasted my entire Freshman year.  I had no social life, GREAT grades, and had broken up with my boyfriend of 3 years.  Essentially, life was lifeless.

The good thing?  I knew it and I recognized it.

The Road to Recovery (ahhhhh!)

Two things played a role in my recovery – my relationship with God and meeting Travis.  Actually, those two things are SO very intertwined that they could be classified as one.

I was raised in a Christian household, saved at a young age and thought I knew God’s love.  But throughout my ED, I was running from Him.  I’m sure it was because I knew that my behavior was wrong.  The mistreatment of my body was like slapping God in the face.  My actions SCREAMED,

“I don’t appreciate this gift that You’ve given me.”

“I want to have more control than You!”

It’s so very hard to walk close to God when you’re screaming at Him.

My roommate in college (a girl I grew up with actually), invited me to church numerous times.  I rejected her invitations (and in fact, sometimes got angry at them – didn’t she know that I was already a Christian?)  But slowly, God softened my heart and opened me up to her requests.  And I went.  And I got more involved.  And made friends.  Christian friends who came in all shapes and sizes and ate food together and laughed.

Taking small steps toward God opened my eyes to how I had been treating myself.  These small steps evolved into an all out SPRINT to cling to Him.  And to change my behavior.

I felt CONVICTION.  I felt REMORSE.  Those feelings, paired with the knowledge that I needed to change, were what helped me recover.  Just like I said in that opening paragraph, I needed to stop whining and DO SOMETHING about it!

So I started changing.  And that’s when I met Travis.

(I want to devote an entire post to how we started dating…this isn’t the time for me to tell that story.  But in summary, Travis and I met through that same nagging roommate.)

I remember some of the first conversations I had with Travis after we began to date.  He told me point blank, “I like girls with butts and boobs.”

What a novel idea!  My body SHOULD have curves!  Just the way God made me.  (I think that’s a huge problem – all us girls are trying to get skinnier to look like men.  And all the men just want women to look like, well, women.)

Now, that statement alone didn’t make me run out and eat a Krispy Kreme.  But it most certainly got me thinking.  Remember – I’m a people pleaser.  And I SO wanted to please Travis.  In this case, changing into the type of girl that Travis wanted, was JUST what my body needed.

After only two months of dating, I knew that I wanted to marry him.  We fell in love.  Like a fairytale story kind of love.

It sounds completely corny, but Travis was my ED therapy.  I felt completely vulnerable around him, but in the best of ways.  As we spent more time together, those past three years of anorexia and bulimia came spewing forth.  And he listened.  No judgment or criticism.  Just open arms and lots of hugs.  Travis is not God, but I do imagine that God held me in His arms in that same way.  Without judgment.  And with total and complete forgiveness.

It took a lot of determination, but I changed my thought processes.  I began to view food as fuel and not an enemy.  Purging was no longer an option.  It wasn’t an acceptable behavior.  I became more flexible and less rigid with my eating rituals.

And I grew some dang boobs.

I’ll forever be on this “Road to Recovery” – a road, for which there is no final destination.  It is foolhardy to say that one can be “completely recovered”.  Much like it is naïve for me to believe that I can be ever be “perfect” or “without sin”.

It is a battle against my flesh.  A battle that I fight daily.  One that I’m winning.  But a battle, nonetheless.

But at least I’m choosing to fight and not lie down.  I’m CHOOSING…because I have a choice.