While I was sudsing my hair in the shower yesterday, my mind wandered to blogging.  A common occurrence these days….the wandering mind, not the showering.

Susan’s post also featured BRUSCHETTA!!  Something my heart sings for, but I rarely make.  You’ll most likely find bruschetta at a fancy baby shower or ladies luncheon.  My life is anything but fancy.  I wear workout clothes daily.  Re-use paper plates.  Those suds from earlier…yeah, they came from SUAVE shampoo.  The exact OPPOSITE of fancy.

Travis doesn’t seem to mind.  He married me for other reasons.  Like my ability to cook Kraft macaroni and cheese.  (Only he would suggest the generic brand…”it all tastes the same”)  Or maybe he was attracted by my uncanny ability to roast broccoli and make our house smell like a giant fart for the following week.  Possibly because I can clap with ONE hand (try it..you can’t do it..only I can).  None of those things are fancy.

How about, he likes me because I can save him money.  Yeah!  That’s the ticket. 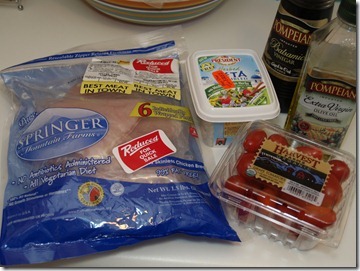 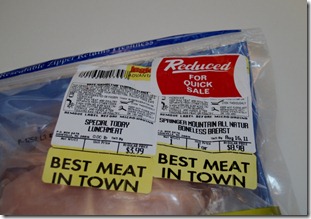 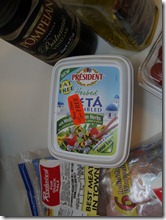 Super cheap chicken and feta…even the tomatoes were half off!!  All in all, I spent around $8 for this entire meal! 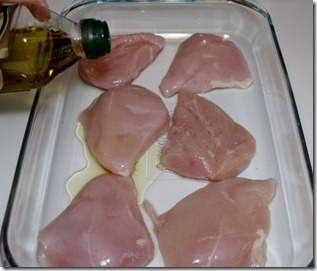 While your chicken bakes, make a fancy side dish: QUINOA!! 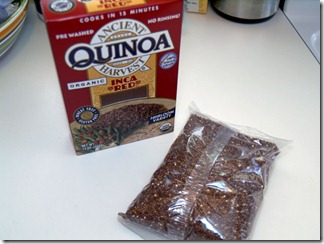 I bought this Inca Red at Greenlife a couple of months ago (ON SALE) and never used it.  6 grams of protein!!

While my quinoa was “fluffing”, I got to work on the tomatoes.  Bruschetta is typically made with  ____, but grape were what I had on hand, so that’s what I used.  Slice them thinly. 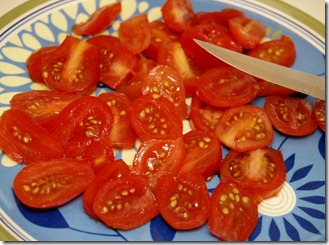 After the chicken is cooked, top with tomatoes and feta.  You could even drizzle a little more balsamic if you like. 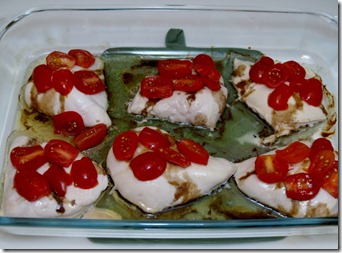 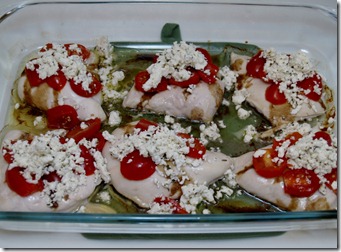 Broil the topped chicken for 5 minutes, until cheese starts to brown.

I’d LIKE to tell you that after this wholesome, mostly organic meal was finished, we all sat down at our lovely dining room table, holding hands and smiling, and savored every morsel. 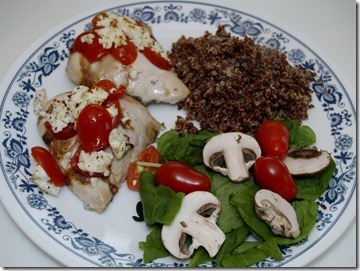 I’d LIKE to tell you that I’m a super-star photographer, who can totally shoot recipes by herself, with one hand holding the camera, while the other drizzles olive oil.

I’d LIKE to tell you that I didn’t eat 3,409 candy corns (or practice one-handed clapping) while cooking the chicken. 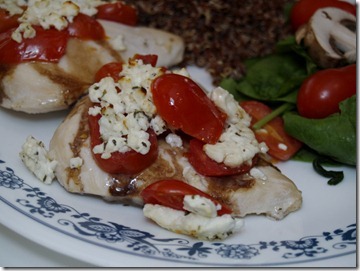 I’d even LIKE to tell you that the first time I read BRUSCHETTA, that I didn’t pronounced it “brush shita”.

In reality, I baked this dish around 3pm, while the kids were napping, my only sane moment of the day.  By the time that Travis got home from work at 5:15, I was rushing out the door to teach water aerobics, so we didn’t get to kiss, let alone eat dinner together.

The dish was probably cold when Travis ate it.  You know, from sitting out for 2 hours after I photographed it. I wouldn’t know.  I was too full from the candy corn to eat, so I bounced my sugar-high self to class.  I’m guessing Travis probably ate his helping on the couch, while trying to ward off handsy toddlers.

And as far as the pictures go, acrobatics were involved.  And maybe the dropping of a camera. (eek)

But, hey, at least it was cheap.

P.S. I’ll be posting the theme for Tuesday Trainer tomorrow!!  So stop back by, pick up a TT button, and film your move!!